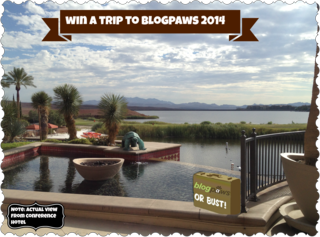 BlogPaws
recently held its annual BlogPaws or Bust Contest! This is the ONE AND ONLY
time tickets are given away to the 2014 BlogPaws Conference, taking place May 8
through May 10, 2014 in Henderson, Nevada.
That’s right–on beautiful Lake Las Vegas, just 30 minutes from the Vegas
strip! Have you seen the view? Read on to see who won!

We
received over 600 entries that qualified for judging. Qualified tweets were
judged on these qualities, assigned a point system for each, and the tweets with
the highest ranking tweets by our panel of judges were selected as the winners:

Here
are the three prizes:

Congratulations
to these creative three winners and thanks to ALL who entered the contest!!!

No
need to fret if you did not win, but let it be known: There are NO more trips
or tickets that will be given away at all. We do plan another sell-out
conference, our 6th BlogPaws Conference, that is. And early bird
pricing ends on October 31, 2013. Get your ticket and be a part of the conference
that started the whole revolution and evolution of pet bloggers and
microbloggers: BlogPaws!

9 Responses to “Winners Announced of BlogPaws or Bust 2014”