BlogPaws has been immersed in the media and we encourage all pet bloggers to embrace media and reach out to get coverage, eyes, and best of all—traffic—for your blog.
I recently taped a segment of Pet Talk with Lauren Collier on News12 Connecticut, which aired several times recently on television. According to hostess Lauren Collier, viewership is about 400,000 people. The focus of the BlogPaws segment “New Year, New Pet, New Products.” You can view the segment below in case you missed it. These are types of opportunities I learned about and then spoke about at all four BlogPaws conferences I’ve attended. Double fun: My dog, Dexter, goes on set with me.

BlogPaws is also on television with Who Let The Dogs Out on the Hallmark Channel. Did you see the first episode that aired on February 1st?
The next episode of Who Let the Dogs Out on February 8th features BlogPaws and our 2012 conference in Salt Lake City, UT. If you were there, you might get some TV time. Tune in to see! Check out this preview clip and see who you know:

Who Let The Dogs Out Twitter viewing party on Friday, February 8th will feature  @TillmanSkates  sharing a link for you to enter a contest. One lucky winner will win 3 nights hotel at
the Sheraton Premier in Tysons Corner, VA for the 2013 BlogPaws conference,
courtesy of Who Let The Dogs Out! And, BlogPaws is throwing in a free
blogger registration! That means the prize is 3 nights hotel plus
registration. Don't miss your chance to win! Follow #TillmanTV and join
the Twitter viewing parties for your chance to win.

Dexter and I attended the World’s Most Expensive Dog Wedding in New York City last year on behalf of BlogPaws. The event was hosted by Wendy Diamond (our 2012 celebrity Nose-to-Nose awards hostess) and all done in the name of charity. It was at this event that I had the idea for a fun fundraiser featuring my dog, Dexter, and his girlfriend Zoe. Well now, the Cake Boss has gone to the dogs, too!
While there, The Cake Boss rolled out their intricate edible artwork, and I was able to get some close-up footage of the cake. The episode aired February 4th on TLC (The Learning Channel). 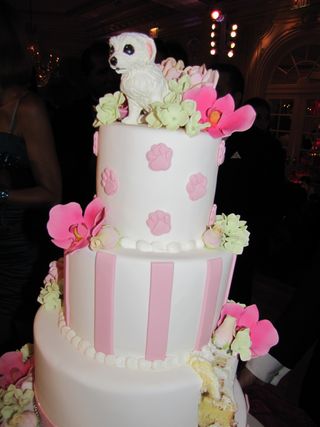 BlogPaws asks: Have you ever promoted your blog or a blog post to the media and if so, share with us where you’ve been or a spot you’d like to secure.
You can learn how to pitch the media and gain successes by attending the BlogPaws Conference May 16-18, 2013 in Tyson’s Corner, Virginia. Registration is open.

3 Responses to “Pet Bloggers Can Get Traditional Media Coverage”