Many of us write about pets for a living, and use our blogs, articles and books to save pet lives and educate the people who love them. I’m always looking for new ways to reach people and find that the dry just-the-facts stuff only reaches so far. I call my work “edu-tainment” and nowhere is that more apparent than in one of my more recent (and a favorite!) project.

You see, I’m not only a lover of cats and dogs, I’m a musician, actor and performer. While talking with my friend Frank Steele, (another actor/musician/animal lover), we thought it would be fun to write a show from the dog and cat point of view. 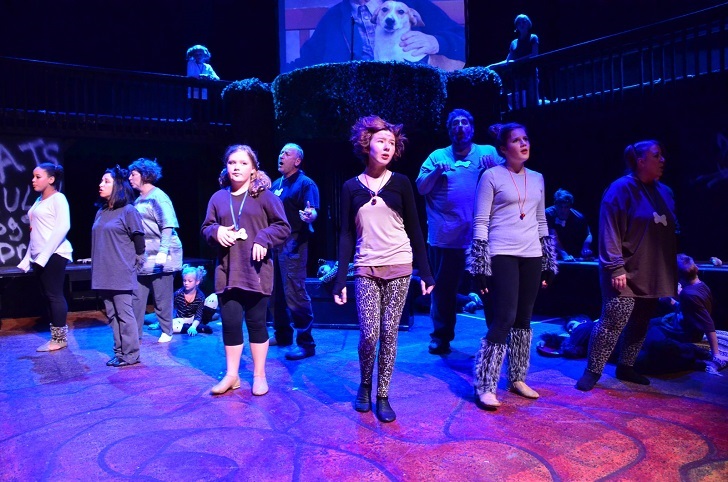 Not people in cat and dog suits, either. No, we wanted the actors to really understand their furry characters, and portray the joie de vivre of a dog munching from the cat’s litter box (ew!) or the cat lamenting her lost human, or the clueless puppy and kitten meeting for the first time. After brainstorming a while, we decided to write a musical, combining a variety of cat and dog “characters” and situations.

Why A Musical About Pets?

Everyone knows the musical CATS, but we wanted something different—something that offered more than pretty music and people dressed up in furry suits. Here’s why.

I’ve found that writing content for my blog or other pet-centric sites feels just a bit incestuous. Oh, they’re great venues, but we’re preaching to the choir. What about the folks who don’t buy pet care books, or read pet care blogs? Heck, that’s one reason I started writing pet-centric fiction, too—another way to reach a wider audience. So for me, wedding the pet behavior and care expertise to our theater passion presented a new, unique way to get the word out.

Frank and I wanted this to be educational, with reality checks, but not a downer—we wanted the over-arching them to be hopeful and uplifting. Done correctly, we thought the show would be laugh out loud funny, with a few tears and lumps in throats of recognition…and ultimately could save pet lives, and perhaps even be used as a fund raiser for animal rescue organizations. And we wanted to include as many different styles of music as possible, which would appeal to the widest possible audience. 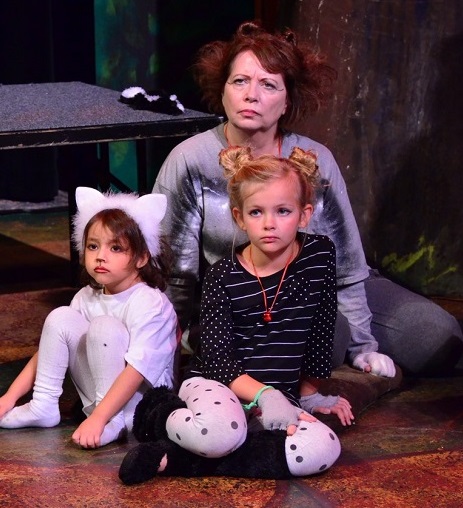 We wanted audiences to go away saying, “So my cat’s not mad at me? THAT’S why he missed the litter box?” or “that’s why my dog chews everything.”

Use All Your Gifts!

We’d written and produced another musical together, partnering to write the script and composing lyrics and music. We’ve both been professional actors/performers. Frank plays drums and was a middle school drama teacher for more years than he’ll admit; I was a classically trained singer, and also play cello and piano, and have in the past few years returned to composing. We’ve played for local “pit orchestras” and after a stint coaching high school choir, we wanted the music to be easy to learn so it would be within the reach of school kids, talented amateurs as well as professional theaters. To make it less expensive to produce and remove the need for live musicians, we created a prerecorded CD for both rehearsal and performance. The result was STRAYS, THE MUSICAL.

STRAYS, THE MUSICAL explores furry foibles from the PETS’ point of view. The actors give voice to a variety of cat and dog characters in this hilarious–and often moving–musical review “drama-dy” that seeks to edu-tain audiences about normal pet behavior while honoring the bond we share with them.

STRAYS features a dozen solos, duets and full company numbers in styles ranging from pop rock to blues, calypso, gospel, jazz, rap and Celtic. The 90-minute performance of monologues, scenes and music are written to be modular, to allow only the cat portions, only the dog sections, or both to be performed, based on the audience demographic. Topics cover everything from how pets lose their homes, to funny people-pet misunderstandings, heartbreak of feral cats, the yearning of pets seeking that forever-someone, amorous dogs looking for romance, and more. There’s even a gospel number, THE MUSE that describes how pets inspire us in so many ways.

My pets both amuse and MUSE me, how about yours? 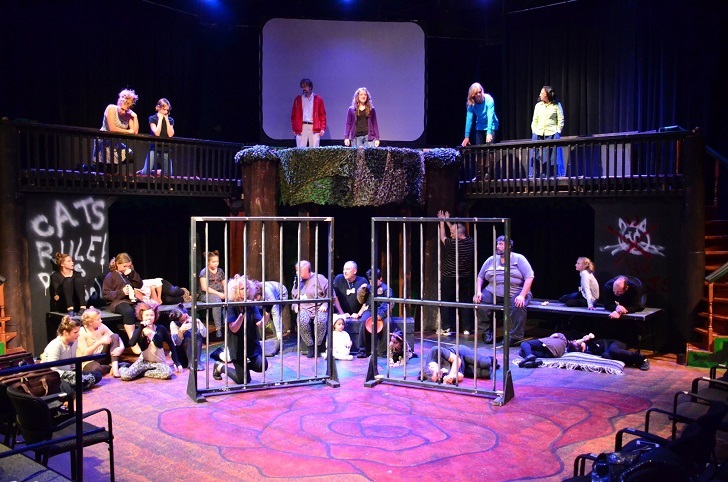 Nothing worthwhile is easy, and STRAYS didn’t happen overnight. Whether you write a blog, or a poem, or a book, or a musical, it takes time for the “idea” to mature.

Frank and I wrote the music and the script over a period of about a year. In October 2013, we previewed six of the songs at the Cat Writers’ Association 20th Annual Conference, in Dallas, Texas to positive reviews.

The following April 2014, we presented the full show in a “staged reading” of the show, with an audience. Based on feedback, we rearranged a few scenes and another song, titled GOTCHA DAY. *s* And a local middle school choir teacher asked permission for her students to perform the NORMAL song in their concert. That experience was fantastic, with the kids learning about what is normal cat and dog behavior, and “teaching” the audience during the performance—and raising funds for a local rescue (their idea!).

Six months later, we held open auditions in conjunction with Sherman (Texas) Community Theater, cast 30 actors from age 5 to 65, and performed the fully orchestrated show to sell-out audiences in November 2014. During the performances, we held fund-raisers for area rescues, local pet product stores and veterinarians donated products and services for prizes, and we even adopted out some pets!

The show continues to mature and we hope it will have nine lives of wagging. You can even find an excerpt of the opening night performance on YouTube (included here) and hopefully will benefit viewers.

We published the script and piano/vocal score on amazon, and have begun receiving positive reviews from those who saw the show or want to produce it. This December (a full year after its opening night), Frank and I will teach a dozen theater classes at the Texas Thespian Festival using scenes and songs from the show. Frank and I have made STRAYS available for licensing and truly hope that STRAYS will continue to edu-tain and save pet lives and owner relationships.

Amy Shojai is a certified animal behavior consultant, a former vet tech, and author of more than 30 pet care books, a pet-centric thriller series and several musicals. You can learn more about STRAYS THE MUSICAL at her Bling, Bitches & Blood Blog.