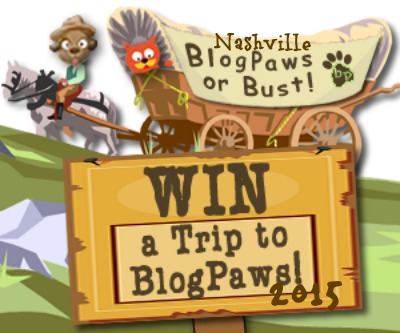 It’s time for the hottest contest of the year: BlogPaws or Bust! BlogPaws is the first, original, and pet-friendly social media conference for pet bloggers and microbloggers to get nose-to-nose and face-to-face with brands, peers, experts, and more. This is the ONLY opportunity you will have to win a full travel package for the anticipated sell-out event, taking place May 28-30, 2015 in beautiful Nashville, Tennessee.  You have twelve opportunities to enter!

Only tweets with the #BlogPawsorBust15 hashtag and #contest hashtag will be counted.

What Are the Prizes?

Grand Prize: A trip for one person to the BlogPaws 2015 Conference in Nashville, Tennessee. Prize includes airfare, four nights at the host hotel, and one full blogger registration: Estimated value: $880 plus flight.

How Many Times Can I Enter?

You can enter up to TWELVE times with ONE Twitter account throughout the length of the contest.  If you have more than one Twitter account, please pick one to use for this contest. Each person entering is allowed one entry per day through a tweet, not 5 entries because they have 5 accounts. Each person has the opportunity to have 12 entries into the contest; one for each day through 10/31, starting now.

How Are Winners Selected?

BlogPaws will use random.org to randomly choose 100 tweets to judge, so be sure to get all twelve of your potential tweets done to increase your chance of making the 100 tweets for judging! Each tweet can be different, or if you feel you hit the jackpot with one tweet you can tweet the same tweet TWELVE times!

The randomly chosen 100 tweets will each be judged on creativity, originality and clarity:

50% Creativity: How well does your photo depict a creative angle?

25% Originality: Is your photo unique and original?

25% Clarity: How clear is your photo? Is it fuzzy and grainy or clear and high quality?

Note: Any tweets not including the hashtags #BlogPawsorBust15 and #contest will be disqualified.

When Does it Start and End? Who is eligible to win?

Any blogger or microblogger (i.e., Twitter, Instagram, Facebook) who resides in the Continental United States is eligible to win. Length of time you have been blogging/microblogging does not matter nor factor into this contest.

How will the BlogPaws team judge all the entries?

After the contest closes, BlogPaws will download an Excel spreadsheet of all tweets. First, we will sort it by Twitter handle and make sure that no one broke the rules and entered more than once per day by looking at the number of entries per Twitter handle and the time of the entries. Second, we will take all qualifying tweets with images and put them in random.org to randomly generate 100 tweets for us to judge. Then, Blogpaws will create a rubric where we can read and judge each photo by the categories listed above. The BlogPaws team will judge the photos. The rubric will NOT include the Twitter handle for the tweet, only the tweet itself. This way we will not know whose tweet we are judging. Third, once all tweets have been judged we will total up the scores and award the prizes based on the score the tweet received.

Our reporting tool allows us to search for the exact winning tweets to find out who tweeted them and who our winners are.

When will the winners be announced?

Winners will be contacted by BlogPaws on or about November 3rd and announced via blog post as soon as the winner’s confirm and accept their prizes. We anticipate for that announcement to be no later than Friday, November 7, 2014.

Where Will My Photos Be Used?

Photos will be seen on the Twitter feed open to the general public. BlogPaws will use the three winning photos in a blog post to appear on BlogPaws.com and will credit the appropriate parties with photo caption.

Good luck from the BlogPaws team!