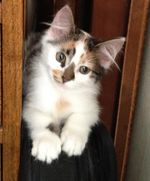 While I realize I typically blog about social media and blogging, having just adopted a new kitten has changed my focus this week — partially because it's hard to concentrate or type with a kitten swiping at the keyboard, clawing my chair or otherwise begging for attention. We have always had cats in the house but Lucy is the first kitten we have had that greets us at the door and with a "wagging tail." I'd never seen a kitty wag her tail unti Lucy came along and it got me to wondering what other cat info I don't know.

Here are some interesting cat facts I rounded up from various internet sources:

To read more interesting cat facts, check out this site.

6 Responses to “Why Does My Cat Wag Her Tail? Interesting Cat Facts”