That's right. It's time for the most anticipated contest of the year. The contest where one blogger will win a full trip to the BlogPaws 2014 conference in beautiful Lake Las Vegas, just 30 minutes from the strip! We'll be accepting entries through Wednesday, October 9 at 7:59 PM EDT. Read on for the full details! 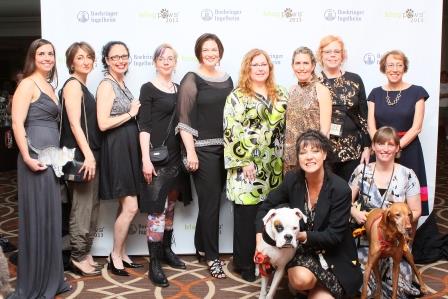 What can I win?

You must tweet the reason you feel that YOU must be at the BlogPaws 2014 conference and include the hashtag #BlogPaws14. Only tweets with that hashtag will be counted. Example, "#BlogPaws14 will motivate, inspire and propel me to take my blog to the next level!" Please do not include links to pictures or blog posts in your tweets. We are looking for words only.

BlogPaws will use random.org to randomly choose 100 tweets to judge, so be sure to get all 14 of your potential tweets done to increase your chance of making the 100 tweets for judging! Each tweet can be different, or if you feel you hit the jackpot with one tweet you can tweet the same tweet 14 times.

The randomly chosen 100 tweets will each be judged on creativity, originality and purpose.

The example tweet above would score high in the Purpose category, but it's not very creative or original.

How long does the contest run?

The contest is open now, and you can enter once per day through Wednesday, October 9th at 7:59 PM EDT. That's one tweet per day from your Twitter account. If you have more than one Twitter account, please pick one to use for this contest. Each person entering is allowed one entry per day through a tweet, not 5 entries because they have 5 accounts. Each person has the opportunity to have 14 entries into the contest; one for each day through 10/9 starting now.

Who is eligible to win?

Any blogger or microblogger who resides in the Continental United States is eligible to win. It does not matter if you are brand new to it, or have been blogging/microblogging for years.

How will the BlogPaws team judge all the entries?

After the contest closes, BlogPaws will download an Excel spreadsheet of all tweets. First, we will sort it by Twitter handle and make sure that no one broke the rules and entered more than once per day by looking at the number of entries per Twitter handle and the time of the entries. Second, we will take all qualifying tweets and put them in random.org to randomly generate 100 tweets for us to judge. Then, Blogpaws will create a rubric where we can read and judge each tweet by the categories listed above. Three people from the BlogPaws team will judge the tweets. The rubric will NOT include the Twitter handle for the tweet, only the tweet itself. This way we will not know whose tweet we are judging. Third, once all tweets have been judged we will total up the scores and award the prizes based on the score the tweet received.

Our reporting tool allows us to search for the exact winning tweets to find out who tweeted them and who our winners are.

When will the winners be announced?

Winners will be contacted by BlogPaws on or about Tuesday, October 15th and announce via blog post as soon as the winner's confirm and accept their prize. We hope for that announcement to be no later than Friday, October 18th.

Good luck from the BlogPaws team!

Please read the Official rules for all contests and sweepstakes on BlogPaws for full details on any contest BlogPaws runs.