How would you like to win a trip to the BlogPaws 2013
Conference in Tysons Corner, Virginia, valued at $1,086 just by captioning a
photo?

It’s that time, ladies and gents: The 2013 BlogPaws or Bust
Caption Contest is here. Grand Prize consists of one (1) travel package for
winner to Tysons Corner, Virginia, to attend BlogPaws 2013 Conference. The
prize includes round trip, coach air transportation for winner (from major
airport nearest winner’s U.S. residence to a Washington D.C. area airport),
plus hotel accommodations (one room) for up to three (3) nights at the Sheraton
Premiere, Tysons Corner. Trip also includes admission to BlogPaws 2013 which
takes place May 16 – 18, 2013. But wait….there’s more…

One (1) Third Place Prize will also be awarded consisting of one (1)
admission pass to BlogPaws 2013 taking place May 16 – 18, 2013 in Tysons, Corner,
VA. ARV of Third Place Prize is $199. The total ARV of all prizes to be awarded
is $1,871. No prize substitution or cash redemption, except at Sponsor’s sole
discretion or as otherwise provided herein. Prizes are not transferable. 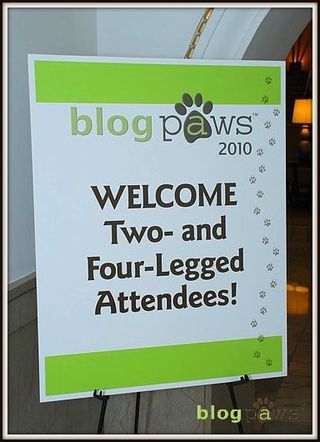 the registration fee that they paid. No
substitution or transfer of prize or election of cash in lieu of prize will be
permitted. Blackout dates, space availability, occupancy limitations and other
restrictions may apply. This package cannot be combined with any other offer.

So what do you have to do? Simply caption a photo and follow the directions.

Where can you enter? We thought you’d never ask! Right here: http://a.pgtb.me/jkZbnP
(which is on the BlogPaws Facebook page)

How many times can you enter? Only one (1) caption
submission per entry form is allowed. However, entrants can submit as many
entry forms with a different caption as they choose, as long as the same (or
substantially similar) caption Submission is not entered more than one (1) time
throughout the Contest Period.

When does the contest end? All entries must be received by
the Contest Period closing date 11:59pm MDT on March 24, 2013.

Good luck and have fun captioning!

Here’s our complete lineup and registration to join us for
the best pet blogging and social media conference, the first, the original, and
ready to up the “bark,” BlogPaws!

5 Responses to “BlogPaws or Bust 2013 Contest is Here: Win a Trip to BlogPaws”