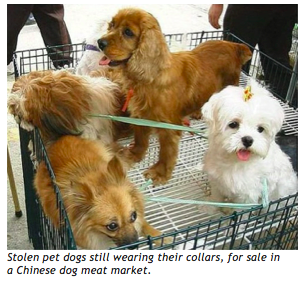 Because we all use products from either China, Vietnam, Thailand or S. Korea, the Dog Meat Trade (DMT) affects us all one way or another, even if we don’t realise it.

Every night in Thailand, masses of caged dogs are loaded onto ‘The 1,000 Dog Trucks’ and shipped across the Mekong River into Vietnam and China, for human consumption. Dog and cat trafficking is being exposed through social media, allowing everyone to become involved in the global push to halt this heinous trade.

Most of the dogs are stolen pets, still wearing their collars and tags and looking for human affection. Vietnamese, Chinese and Korean customers demand that dogs and cats be tortured to produce the desired tough meat, subscribing to the belief that tough meat makes men masculine when they eat it. Tender meat is considered very low quality. 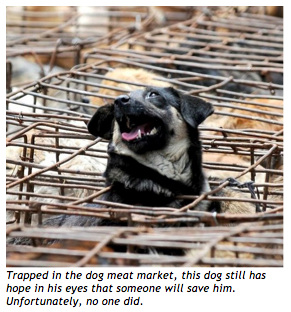 In each of the countries, cats are treated extremely cruelly; seen as evil vermin, they are often trussed for
hours before being flung into huge boiling cauldrons where they are boiled alive to make either cat tonic, juice or broth. Eating or drinking cats is mistakenly believed to help cure rheumatism. Small dogs are often treated the same way.

In an open letter, Soi Dog Foundation founder John Dalley, located in Phuket, Thailand, said: “Since active campaigning begun in late 2011 more arrests of smugglers have occurred than during anytime in the past," emphasising the power of social media. Soi Dog has launched a "Trade of Shame" campaign aimed at ending illegal cross border trade in dogs once and for all.

Clashes between protesters and animal traffickers are regularly reported in Chinese newspapers. China is seriously considering banning dog and cat meat, and we only have to look at the Panda law (some poachers were given the death sentence), to see how swiftly China can act when they finally instigate new laws. 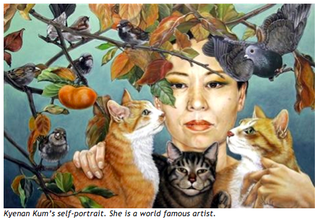 I’m privileged to be working side by side with one of the world’s leading fighters against the dog and cat meat trade, Korean born Kyenan Kum. Twenty two years ago, Kyenan and her sister Sunnan began fighting against animal trafficking, and in 1988 she published the first DMT photos, exposing Korea’s secret shame.

I’ll be actively bringing reports directly from Kyenan and look forward to sharing this information with everyone.

August 7th, 2012, was the first of my #DMT Twitter awareness events and I’d like to thank everyone for their participation, especially those who retweeted information via @PepiSmartDog.

Michele Brown is a BlogPaws Community member and the writer behind @PepiSmartDog. Michelle lives in Australia and has been a front line animal rescuer for over thirty years, in many countries.