When a friend posts a Crazy Cat Lady action figure link on your Facebook wall you know that you have crossed into the realm where you wonder, “How many cats is too many cats?” It also never fails that when I am at a family gathering, as I was recently, the question will come up, “So how many cats do you have now?” I mean, really is four cats too many cats? I think not!

When I was growing up we lived on a farmette;  we had a few acres of land, I owned a horse, guinea pigs, gerbils, 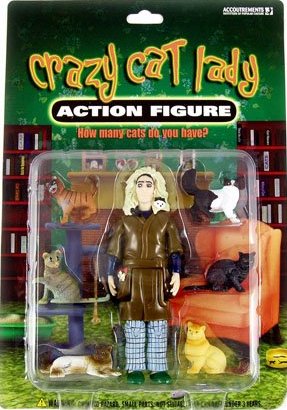 rabbits. our family had at least two dogs at any given time and we had two “indoor cats” and a plethora of “outdoor/barn cats.” I’m convinced that when you reside in a rural area, on a semi-deserted road and have a barn, people thought we were fair game for dropping off their unwanted cats and kittens. My parents, bless them, always let us feed and house them and the cats had the shelter and safety of our semi-heated barn and a loft full of hay and straw. Many of the cats were vetted and neutered or spayed and they were just as happy as our indoor cats and they addressed the mouse population.

Every cat that made its way into the barn and into our hearts were named, loved and mourned when they passed.  When I moved into my first apartment I adopted one cat, which led to adopting another cat until at one point I had either adopted or was fostering six cats.

I’ve been lucky fortunate in the fact that I have never really faced too many issues when it comes to introducing a new cat to the menagerie. There are the typical days of hissing and ill-tempered behavior with the new cat or kitten learning its place in the family dynamic and the long-timers asserting their rule of the roost. It doesn’t usually take long before everyone is sharing a food dish and litter boxes.

For those of you keeping count, there are currently four adopted kitties in the house:

Just as no two potato chips are alike, each of the cats in the house has unique personalities, unique quirks and unique ways of interacting with each other and with each member of the family. Just like potato chips that come in different shapes, sizes and levels of salt or flavor, the cats certainly make the house interesting,  full of snuggles and they have fewer calories chips!

Are you a cat lover? How many do you have? Do you consider yourself a “crazy cat lady?” I wonder… because I am a baby boomer 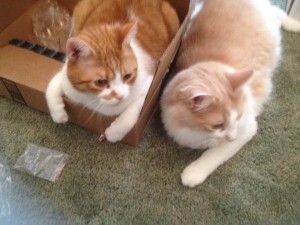 and have four cats, that perhaps I have crossed over into crazy cat lady territory!

One of the best things about being involved in BlogPaws and going to the BlogPaws’ conferences is that no one ever accuses you of having “too many pets” or looks at you funny when you address your diva poodle in such a way as to think you just might get a response!