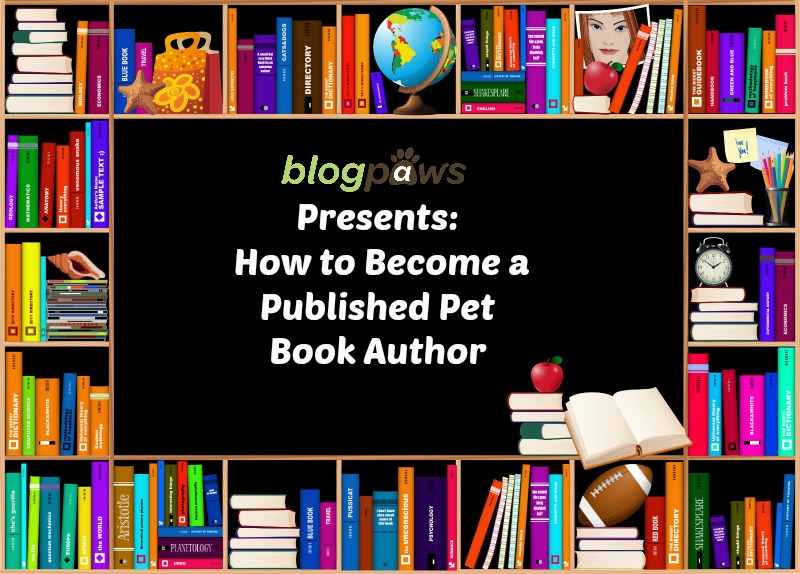 Have you ever dreamed of being a published pet book author? There is something very dreamy, rich, accomplished, and satisfying in being able to admit you are a published author.

You are not alone, and BlogPaws is poised to deliver on the promise of uniting aspiring published authors with those who have been there, done that, and wish to share their advice with others.

During the BlogPaws 2015 Conference in Nashville, Tennessee, there will be a “mini-track” of two panels, focused on writing and publishing, held in conjunction with the Cat Writer’s Association (CWA). Anyone who attends the BlogPaws Conference is eligible to attend these sessions.

In the meantime, book publisher and BlogPaws’ co-founder, Yvonne DiVita, dishes the publishing scoop with three ladies who are experienced pet book authors and publishers. The panelists will also be speaking at the BlogPaws Conference.

Oh and keep reading, especially if you’ve ever heard of Animal Planet, Reader’s Digest, the Oprah Winfrey Show, PARADE magazine, and CNN: These ladies have had their hand, er paw, in them all. Some highlights include:

Working full time, managing a family, trying to have free time and still blog while checking in to social media: How can a person stay sane and get it all done?

Yvonne DiVita asks, “Tell us a little bit on how you actually did the writing though. Did you sit down for four hours a day or did you have a schedule where I’m going to write in the morning from 6 – 9 then I’m going to go do this then I’m going to come back. What was it like especially if you were doing two books at once?”

Amy Shojai says, “Yes. That was interesting. I had to be very, very organized because if one of my resources called me back I looked like a bongo player if I didn’t know why they were calling me back. I’d have to know you’re calling me back for this book and not that book. So and I was very, very much it was very topic oriented, a lot of the books I did, three books for Rodale Press. So they’re very kind of A to Z, home remedies or first aid or natural healing. And so I would know that I was speaking with this particular expert about cat abscesses and dog bites and something else. And so I would interview for maybe two or three different topics at that time.”

Yvonne DiVita says there is such an overwhelming sense (of connection) at BlogPaws. You know, the community, the conference and everything. And so, basically what happens is, people want to like you said, express that love that they have. And it’s interesting to me because within my community which all of you in some way, shape or form or are part of, we understand it. And so we want to write this book because we want everyone else to understand it. So we’re not sure that happens but we should all keep trying.”

Lisa Erspamer, who was co-executive producer of The Oprah Winfrey Show, shares, “I think it’s really important for people to realize that sometimes the best books are the most unconventional. Right? The ones that do the best.”

And what exactly does Lisa use as an example in a hat tip to unconventionality? Scroll up to position 16:35 to find out.

Karen “Doc” Halligan is the author of the award-winning book Doc Halligan’s What Every Pet Owner Should Know: Prescriptions for Happy, Healthy Cats and Dogs (HarperCollins, 2007) and has authored numerous articles for PARADE magazine and other media.

Halligan’s book idea was picked up during a very unique situation. She says, “When I decided I wanted to write my book, there was a consumer report article that came out just trashing veterinarians that we are just money hungry swabs. And that’s what put this seed in to like, ‘wait a minute, no this is why we have to spend so much money.’ So I took an extension class at UCLA on how to write a winning book proposal. Because I’m a veterinarian, I’m not an author. And I write like I talk, which is not good but they have things called editors which, you know save your life. So I go and I take this class at night and it’s just sit 20 people. And low and behold I told them my idea I want to teach people how to save money on their vet bills everyone in the class was like, ‘I’d buy your book.’

The teacher actually went up to Halligan at the end of the class and said, “I would like to submit your proposal to my agent who’s in New York.”

And that’s how she got an agent: Just by taking an extension class at night. Because she was committed to write this book.

Other topics included in this BlogPaws Shares video include submissions, marketing, book promotions, editors, and self-promotion with blog.

This gathering represents one of the most insightful looks into the world of getting published, particularly from blog to traditional book, particularly because these ladies are dynamos that are living the dream.

Watch the complete thirty minute video in its entirety here and join us for the 7th BlogPaws Conference in Nashville, Tennessee, where the CWA will present two panels on writing and publishing.

About the Above Guests:

Amy Shojai is a certified animal behavior consultant, and the award-winning author of 30 best selling pet books that cover furry babies to old-fogies, first aid to natural healing, and behavior/training to Chicken Soup-icity. She created the Puppies.about.com site as the Puppies Expert and was the cat behavior expert at cats.About.com, and you can find her half hour Internet Pet Peeves radio shows here. Amy has been featured as an expert in hundreds of print venues including The New York Times, Reader’s Digest, and Family Circle, as well as national radio and television networks such as CNN, Animal Planet’s DOGS 101 and CATS 101. She’s been a consultant to the pet products industry (including as spokesperson for PetHealthyStore and Perfect Litter) and a host/program consultant for select “furry” TV projects. Amy is also a musician, actor and playwright, and brings her unique pet-centric viewpoint to public appearances and performances, audio books (her own and others), writer webinars, conference keynotes/seminars and THRILLERS WITH BITE! More about Amy Shojai here.

Lisa Erspamer most recently served as chief creative officer and executive vice president of programming and development for OWN. Prior to that, Lisa was co-executive producer of The Oprah Winfrey Show, where she produced and oversaw hundreds of shows, including the biggest flash mob in history, the legendary car giveaway, Whitney Houston’s final interview, and many others. Check out her Letters books: http://alettertomycat.com/ and http://www.alettertomydog.com/ and follow her on Twitter at https://twitter.com/lisaerspamer

Renowned veterinarian, author, and celebrity spokesperson Karen “Doc” Halligan has developed a distinguished veterinary medical career while establishing herself as a national authority on animals. She is the author of the award-winning book Doc Halligan’s What Every Pet Owner Should Know: Prescriptions for Happy, Healthy Cats and Dogs (HarperCollins, 2007) and has authored numerous articles for PARADE magazine and other media. She has appeared regularly on television on the Katie Couric show, Doctors, Bonnie Hunt Show, Kelly and Michael, the Today Show, the Mike and Juliet Show, iVillage Live, Dr. Drew’s Lifechangers, The Insider, CBS Early Morning Show, Fox and Friends, Dog Tales, Animal Rescue 911 and Extra TV. On Animal Planet, she frequently appears on Dogs 101, Cats 101 and Americas’s Cutest Pets. You can learn more at her website (http://dochalligan.com/) and follow her on Twitter, too, at https://twitter.com/dochalligan