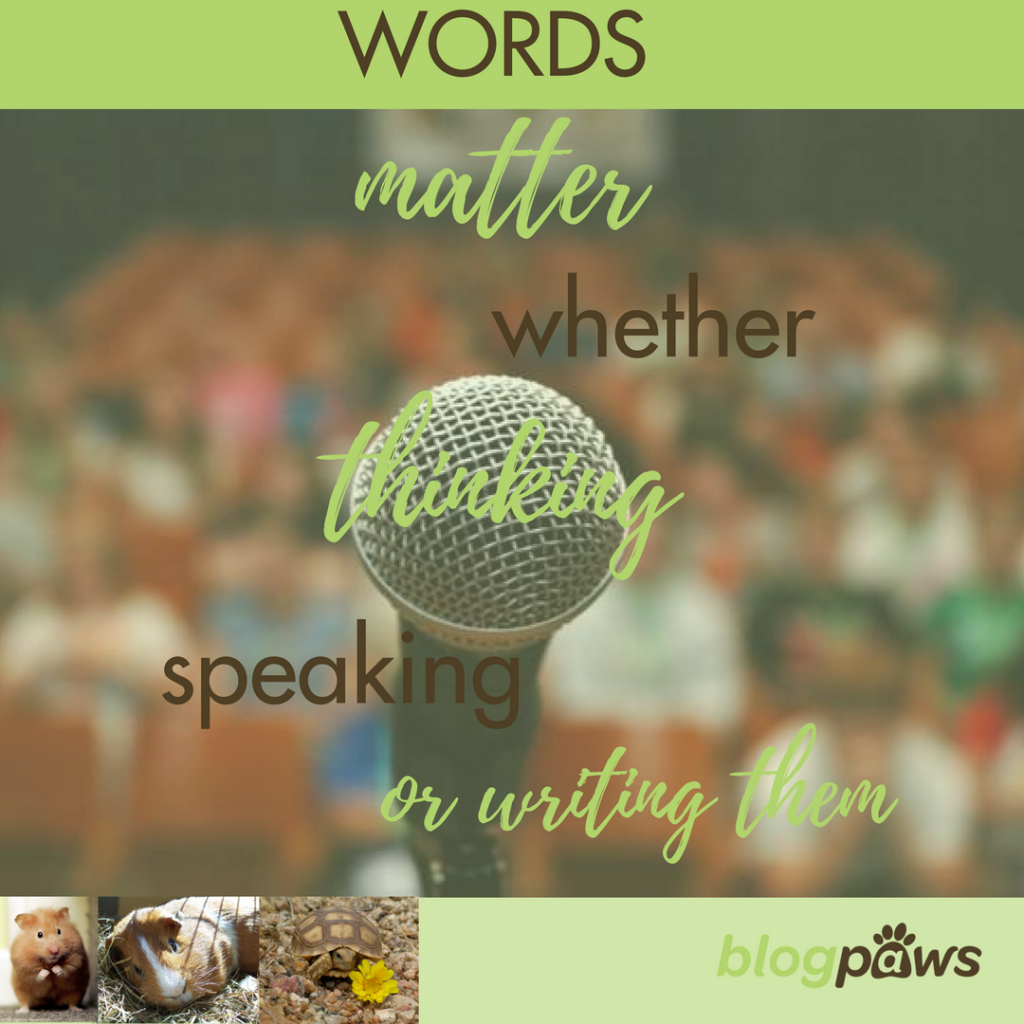 “You’ll be our keynote speaker this year,” she said.

She couldn’t hear my heart thumping like a bass drum, but I could.

Understand that it wasn’t fear of speaking that was making my heart pound and my throat close up! It was fear of being the lead speaker at a conference full of my peers. The word “peers” is important because it’s often harder to speak in front of people you know than to speak in front of people you don’t. After all, those who don’t know you have not formed preconceived notions of how successful you should be. They may love you whether you are awesome or just ‘okay.’ Your peers – they come to the table with expectations, and you better meet those expectations if you want a standing ovation.

We can talk about the whole standing ovation thing, too, how it’s become more normal than not and how it doesn’t always signify excellence.

Words matter more than most people know or understand. We learn to talk early in life. Many of us form full sentences by the time we are two. By the time we start kindergarten, we’re talking a blue streak; we know our colors, we know how to form sensible sentences (asking Mom for ice cream just before dinner, then giving her real reasons why it won’t spoil our appetite!), and we learn humor.

What happens between kindergarten and a career is debatable. Some of us embrace language because we read voraciously. We see the power of the written word to inspire our imagination! We begin to love certain authors, and we criticize the movies made of their books because the movie is never as good as the book!

Some of us embrace the sound of words. We either become vocalists – singers – rock stars – whathaveyou, or we become fans of such. We love the way words sound with music. We begin to appreciate the hard work that goes into making a Broadway musical, for instance. Or a movie with a sound track that sticks in our head for many years, so much so that one or two notes brings it all back to us, and when there are words to accompany said sound track, they pop up in memory, also.

“You’ll be fantastic,” Shawna said. She said it with complete confidence. I could hear the smile in her voice.

“I will,” I said. My voice was not full of confidence, there was no smile there. I swallowed hard and started thinking… about how words matter and how I would need to write, and then speak, a presentation to start the conference off right.

I am not yet finished with his book, but it’s a must-read on my shelf. And, it did help me craft my story for the WIPIN conference.

In doing so, the moral of the story was paramount. What did I want the audience to take away? Because my focus in BlogPaws and The Lipsticking Society is leadership through thinking, speaking, and writing, my story needed to show (not tell) how I grew from a shy, wayward young girl, writing stories with lead-tipped pencils, into a woman who could stand on stage and perform for an audience.

Keynotes are a performance. I learned that from Michael Port, who is a master at this thinking, speaking, and writing thing. While I have not worked with him personally, I do follow his work and read his newsletter. 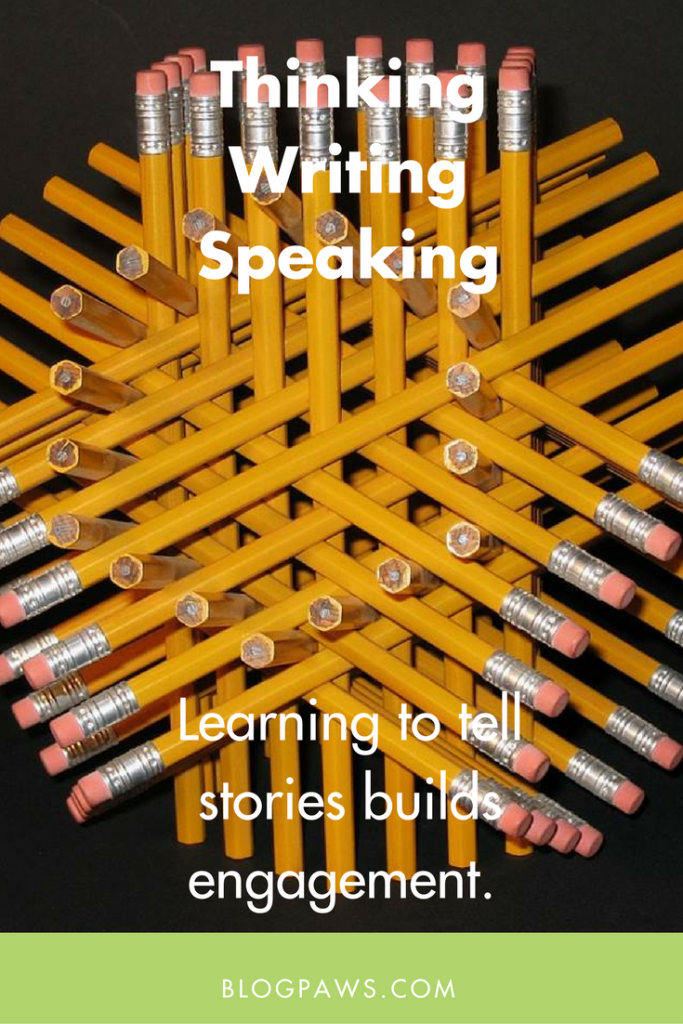 That’s what helped me as wrote the story that I would perform on a small stage at a conference full of women, women much like myself. This meant my story should be as relevant to them as it is to me. And so, I began with me – the little girl me, who, in second grade, wrote about a life she wished she could live. A life with pets. Because, as I said, pets make everything better.

I recently discovered this post on Copywriting and rhyme, delivered to my inbox. It’s from Native Ads Academy, and it tells us that poetry is an effective tool in copyrighting.

“…it’s because our brains not only can remember the rhyme more effectively, but also because things that rhyme are seen as holding a measure of truth.”

Without having read the article, I added a poem that has influenced my life to my performance. I recited just a small stanza of the poem, to drill the message home. The poem is O Me! O Life! from Walt Whitman, written in 1892.

“The question, O me! so sad, recurring—What good amid these, O me, O life?

Answer.
That you are here—that life exists and identity,
That the powerful play goes on, and you may contribute a verse.”

And so, the entire performance revolved around this concept – that we are here, that we have identity, that the powerful play we call life goes on…daily…and we may contribute a verse.

As the copywriting article notes, words matter. Even the way words are arranged, matter. This is one reason poetry works, as I shared above. Poetry is easy to remember, it has cadence, and it tells a story in and of itself. Rhyming poetry, especially, lends itself to speaking out loud and fitting into our memory. As a young girl, I memorized dozens of poems, all of them stories that lifted me up and helped me get through the powerful play.

As I worked on the presentation for my keynote, I knew I had to insert moments of audience participation. Among the laughter I hoped to create, I also wanted each person to have a part in the play.

This involved asking questions and waiting for the answer. It involved having the audience do something – twice I asked them to “come with me” on a little jaunt. One trip was to a meadow or park, where we all sat under a tree. Another trip was to walk two blocks down a city street and arrive at a corner grocery store.

Pulling the audience into my story, as if they were on stage with me, brought them into the narrative not as ‘extras’ but players. It also helped me, the speaker, feel less like a performer on stage, and more like a member of the troop, if you will. My hope was to create a “we are all in this together” moment, and many people came up to me afterwards to say I succeeded.

For me, the thinking, speaking, and writing parts of what I did came naturally. I have been a writer for many years. I don’t do a lot of speaking, but I’ve done some. And, all of that involves thinking: before, during, and after.

Each of the influencers in the BlogPaws Influencer Network needs to practice thinking, speaking, and writing, in my opinion. The best of you will be asked to get up on stage, some day. I hope I am there to see it and applaud when you take that accomplished bow.

Learning how to write, speak, and think as a leader, as a player in this powerful play called life, isn’t a choice. It’s a necessity. Words do matter. Use them wisely. 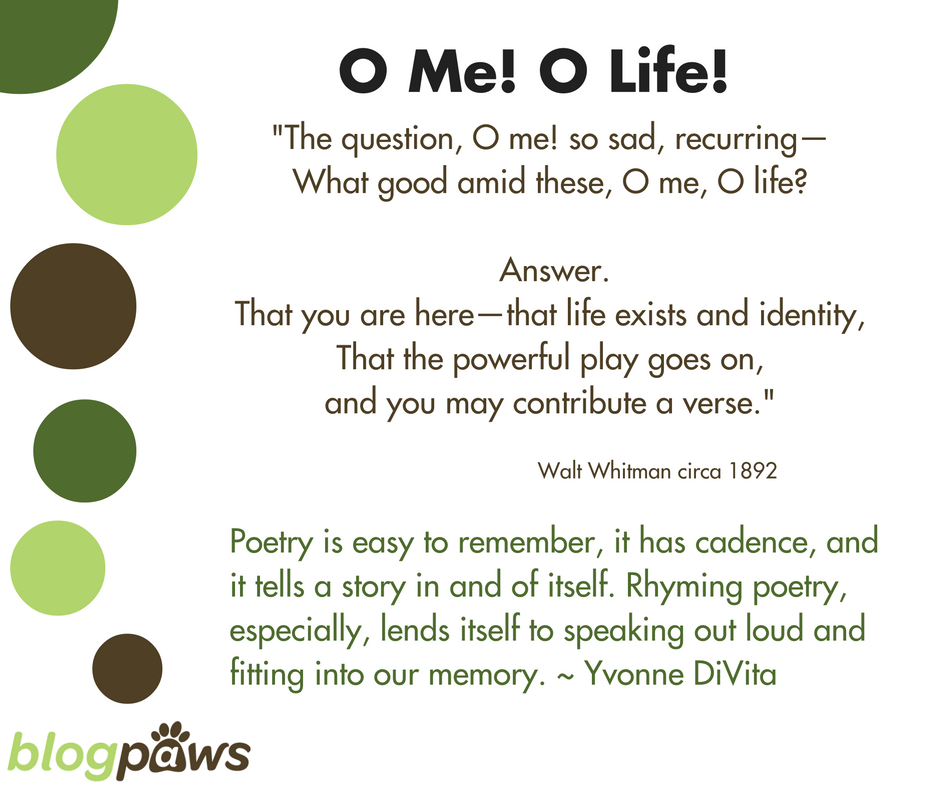 Yvonne DiVita is a Co-Founder of BlogPaws. She is dedicated to storytelling and the human-animal bond. When not working on BlogPaws, she writes at Scratchings and Sniffings and The Lipsticking Society. You may contact her at Yvonne@blogpaws.com.