Chances are you have heard about the cat that “attacked” its family and forced them to flee and lock themselves in a closet. Is it a 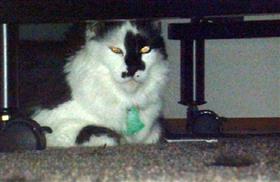 matter of “bad kitty” or “bad owners” or a combination of both?

According to an article on Pet360.com: Huffington Post ran an article about the Portland, Oregon cat who attacked his family and kept them confined to a room in their house.  According to Cat Who Attacked Baby ‘Went Over The Edge’: 911 Caller, Lux was prompted to attack a 7-month-old child who pulled his tail.  Lux then scratched the child on the forehead, which made his owner, Lee Palmer, kick the cat “in the rear”.  After incurring further physical trauma, Lux reportedly “went over the edge” and chased all human and canine family members into the safe confines of their bedroom.

Read the Pet360 article on what could be done to make this kitty nicer. Have you ever been in a situation like this and if so, what steps would you take to help make your pet more family friendly?