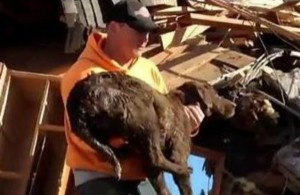 The mudslides that have devastated an area of Washington State have left families homeless and many people unaccounted for. The Kuntz family had lost so much and they’d given up hope of finding anything to give them hope… until they found their dog, Buddy, had survived the mud slide.

The family spoke with the Seattle Post Intelligencer and told the reporter they didn’t have much hope for finding their beloved pet. He was found and although he was covered in cuts and bruises and mud, it was anticipated that he would be all right. You can read the entire story about his rescue and his family’s efforts to help others find their own beloved pets at Pet360.