Goblins and ghoulies, candy corn and cornstalks, doggie costume contests and parades: It’s that time of 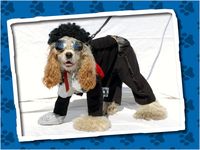 year when Fido gets a scary groove on and dons the Halloween garb.

Ever wish your dog could be the prize winner in the local parade, online photo contest or pet event? Having judged and entered dozens of Dog Halloween Costume Contests over the years, there are throngs of dog lovers who love dressing their dog devo and diva in honor of this spooky time of year. Here are the top ten things I've learned (as both a judge and contest winner) to help your dog win top dog, best costume and move to the front of the pack.

1. Concept costume: What's that you say? It's the type of costume where people have to think, maybe even speak it aloud, to "get it." For example, I won first place and two different events to benefit rescue last year with my dog, Dexter's, costume. He wore bloodied plastic spoons and knives? How about the small boxes of cereal? He was, of course, "a serial killer." Total cost for this costume, by the way? $14.99

2. Go opposite: Ever see a dog dressed as a squirrel? Fido dressed as a cat? People love polar opposites, those people being judges.

3. Pack of Dogs: Team up with fur-ends and pull your dogs together in pursuit of the prize. For me, it's usually not about the loot but having fun with everyone and celebrating smiles doggie style. Some themes? Wizard of Oz or how about this adorable football-theme team?

4. What's Making News: Take a news story and turn it into a costume. Remember the swine flu scare from a few years back? Dog Mom Judy Fridono came up with "Swine Floozie!!!" How hysterical is this:

5. A Slice of Pop Culture: Who is hip and in and would make a clever costume? I met this gang at a Halloween costume contest in 2010 and they dressed their chihuahuas as members of the Jersey Shore television show (with the owner resembling Mike "The Situation"). They won first place. Or check out Michael "Cocker" Jackson from Patty Troup. Gotta love that glove. He sure gave us a "Thriller." 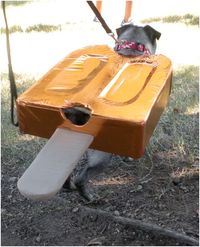 6. Modify a kids' costume: When my dog was a pirate for Halloween, I cut and modified a child's size pirate costume and added a parrot purchased at Party City for $5.99. I super-glued that on and she was the most unique pirate in the parade. This is my Brandy, eternally missed:

7. Dynamic Duo: Dressing with your dog theme-wise – this can go either way; if your dog has a caveman costume and you are the cave woman, that is way cute; stage moms and dads beware, these contests are for the dogs. Complement the dog’s costume, don’t overshadow Fido.

8. Comfort and Enjoyment: Your dog needs to enjoy it and not look uncomfortable – the people constantly adjusting something Fido clearly isn’t happy in won’t (and shouldn’t) catch the judges eyes or votes.

9. Music:  When my Brandy was a clown, I added balloons and played “it’s a small world” on a tape recorder I held in my pocket (yes, the tape recorder days). She won first place and there were several clowns there.

10. Modify Dog Clothing: I used a dog’s polo shirt I found at a pet supply store for 6.99 and used it as a base for Dexter's "cereal killer" costume.

Take a familiar costume and take it up a notch: Clown costume with a makeshift boa, witch costume and when you walk by the judges, spooky cackling sounds from a tape recorder in your pocket

Don’t have to explain it to me. If I cant tell what it is when  I look at your dog (or with a little thought), it isn’t good costume fodder. Don’t tell me “Now this glitter represents the galaxy and my dog is a star in it, etc.” – let the costume speak for itself.

Get your dog used to clothes before going for the full-on Halloween gear. Ever see that dog who is so miserable he sits and looks like someone just took his favorite toy away? Or he tries to roll and scramble to get out of it? Comfort is key. My dogs are accustomed to clothes (mostly for warmth in the winter) but my pooch wears a bath robe after his tub time. He knows clothes. Plus if you start with a piece of clothing made for dogs and just modify that, Fido won’t know the difference.

I did this video for FIDO Friendly magazine last year. There are eons of costume ideas in it along with the pics and tips above. http://www.youtube.com/watch?v=4jbuy-NCr8w&feature=player_embedded

My pooch is setting the bark high this year and his costume will be revealed here on the blog on October 30 here on the blog. He will be making a guest appearance on Pet Talk with Lauren Collier, News12CT, on October 30th, too, in full gear. Check out the Fidose of Reality Dog Halloween Costume Contest and get your wag on! (of course, sometimes cute wins paws down).

Oooh and be sure to check out “Halloween on a Boo-String Budget” appearing in the fall issue of FIDO Friendly magazine, which yours truly penned for pup-tacular costume tips on a budget.

Have a fur-bulous Halloween!!!!

About the author: Carol Bryant has traveled with dogs for over 15 years and is touted as a dog product and travel expert. A frequent media contributor, Carol has appeared on Animal Radio and Oprah Radio’s Gayle King Show, WBAL-TV, News12CT, and as a guest speaker at conferences and seminars about social media, writing, dogs and dog travel. She is also a two-time nominee from the Dog Writers Association of America.  Visit her blog at www.fidoseofreality.com and the FIDO Friendly magazine blog at www.fidofriendly.com/blog.