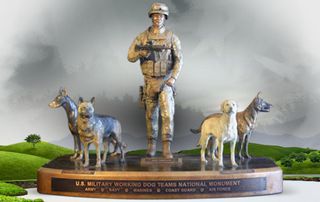 Some
gave all. Some never returned. On this Veterans Day and always, we bow our
heads and raise our American flag to honor those who fought for our freedoms,
defended our honor, and showed bravery in the face of adversity, then and now.

Recently, the U.S. Military Dog Teams National Monument dedication ceremony was held October 28 at Joint Base San-Antonio Lackland. Check out the video below and then keep reading to learn about other dogs who gave all in the name of their call to duty.

Did you know about these 5 dogs who served valiantly for their country:

Rin Tin
Tin – best known and remembered for movies and television fame, when German
Shepherd Rin Tin Tin came to the United States, this breed was not widely
known. Rin Tin Tin was actually the puppy of German war dogs and found in 1918
by an American Captain in Lorraine, France. He was found in an abandoned war
dog station. Although not directly involved in war himself, Rin Tin Tin went on
to movie fame for Warner Brothers.

William
the Conquerer, or Willie – the dog of General Patton. Patton was a lover of
bull terriers and is it any wonder that he acquired his first during World War
I? The dog was appropriately named Tank. During World War II, Patton acquired
Willie, a white bull terrier. The two went everywhere together. Patton died in
December of 1945 from injuries sustained in a car accident. Willie lived his
years out with Patton’s wife and daughters. A twelve-foot high bronze statue of
the pair is erected at the Patton Memorial Museum in Chiriaco Summit,
California.

Kaiser
–  the first Marine Scout Dog killed in
action in Vietnam (July, 1966). It is believed that about 500 dogs and 250
handlers were killed during the Vietnam War.
Marine Lance Corporal Alfredo Salazar was responsible for Kaiser and
said, “He came to me and licked my hand. From then on we were a team.” And a
team they were. They participated in more than 30 combat patrols and dozens of
major operations.  In July of 1966,
Salazar and Kaiser were leading a patrol through heavy brush. Kaiser was hit
almost immediately by heavy fire and hand grenades. Salazar said, “He tried to
lick my hand but then he died.” He was carried back to the company area and
buried under a shade tree. They named the area Camp Kaiser in his honor.

Fluffy
– Iraq Special Forces Working Dog – A unit of twelve men deployed to northern
Iraq requested help from Kurdish allies in the form of a dog. What they were
given was an abused German Shepherd former Iraqi police dog, weighing only 31
pounds and severely underweight with missing teeth. After about 2 weeks of
training (not nearly the amount most dogs receive), Fluffy was put to work. He
guarded Special Forces soliders during missions. Sgt. 1st Class
Russell Joyce said, “He’s been in harm’s way and shot at more time than anyone
on my team.” Fluffy retired and fears arose he may be euthanized because he had
to stay behind in Iraq (due to customs and health laws). Joyce urged Senators,
the Pentagon and the State Department to gain public support.  In the 1993, Fluffy flew from Iraq to Germany
and then onto Charleston Air Force Base in South Carolina, where he lived out
hisyears with Sgt. Joyce.

Stubby
– hero dog of World War I – So touching and amazing is the story of Stubby that
his military gear on display at the Smithsonian in Washington, D.C. Stubby’s
journey begins with the Great War in Europe. Because times were not good in
France, the American Forces were viewed as second class soldiers and not to be
trusted. Stubby lifted morale by visiting soldiers and warning them of gas
attacks such as waking sleeping sentry.
On one occasion, Stubby flushed out a German spy in the Argonne region
by clamping down on the seat of his pants until backup could arrived. He was a
lifetime American Legion member and marched in each of their parades until his
passing. He has perhaps one of the longest and greatest tributes in the form of
an obituary, which appeared in a three-column tribute of the New York Times.
Read it here. http://www.ct.gov/mil/cwp/view.asp?a=1351&q=257958