One of the great things about BlogPaws is getting to make
connections with some of the most amazing people you’ll ever meet. At my second
BlogPaws event in Denver, my friend Dr. Janet Crosby invited me to dinner with
a group of veterinary professionals, and it was there that I got to meet Dr.
Cathy King of World Vets for the first
time.

Now you might think that someone who has a DVM as well as a
PhD and built an international veterinary volunteer organization from nothing
would be a little intimidating, and I would in theory agree with you, but
nothing could be further from the truth. Dr. King came to BlogPaws to check it
out, just like we all do, and we sat around for hours talking about our work,
our passion for animals, and the relative merits of living in San Diego versus
Fargo.

I was inspired by Dr. King’s passion to create a volunteer
based organization that would provide spay/neuter, medical care, and education
services to underserved international communities. I left BlogPaws with a clear
goal: one day, I would go on a World Vets trip.

In the meantime, March 11, 2011 happened. That day, Japan
was forever changed. As I sat in horror, Dr. King was putting together a team
to send to Japan. “I didn’t know World Vets was doing disaster relief too,” I
said to her.

“Oh, we just started,” Dr. King replied. And how: World Vets
was the first animal relief organization on the ground in Japan – within 72 hours if you can believe it – and
immediately put together multiple pallets of supplies for local rescue
organizations, helped set up emergency shelter and decontamination stations,
and assisted with the evacuation of the pets of military personnel who were not
allowed to bring their beloved pets along during mandatory evacuations and were
forced to leave them behind.

That day, I contacted Dorian Wagner and Jane Harrell, my Be
the Change partners in crime, and asked for their help in organizing a project
to help the World Vets efforts in Japan. Paws for Japan took place on March 17th,
with hundreds of bloggers spreading the word about World Vets and the need for
animal relief in the disaster zone. That event, made possible by you, the
bloggers, was the biggest donation day World Vets has ever seen and made such a
difference in what relief they were able to offer. Never think that you don’t
matter.

Since that time, World Vets has sent disaster response teams
to Haiti and Thailand, and continues to send teams all over the world to
perform much needed spay/neuters, preventive care, and education to locations
as far flung as Mongolia, Tanzania, and Peru. 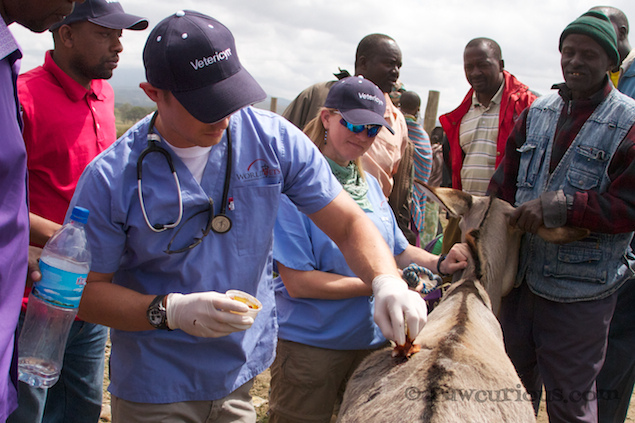 I have been fortunate enough to see World Vets in action in
two places this past year: Arusha, Tanzania and Granada, Nicaragua. We treated
donkeys’ backs while Maasai peered over our shoulders in the baking sun and
gave dewormer to litters of puppies under the shadow of a still smoking
volcano. As you read this, a team has just returned from a 5 month mission
aboard a Navy ship. Thousands of animals whose lives were made better because
Dr. King decided to Be the Change, starting with a change jar on her clinic
counter.

Donations such as the generous gift from BlogPaws make
possible their work in 36 countries and counting.  Volunteers pay their own way to go on these
trips,  so donations go directly to the
organization’s work. World Vets is so very grateful for everyone’s continuing
support.

I’ve been working on an idea to create a Blogger Action
Network to keep everyone informed if another disaster like the tsunami hits,
and I’ll keep you all posted. After all, every day has the potential for us to
Be the Change. I hope you will stand with me once again if the need arises.

I’m so grateful that my involvement in BlogPaws has allowed
me to make such meaningful connections in the community. For more information
about World Vets, please visit www.worldvets.org.

[BlogPaws donated $2000 to World Vets at the 2012 Salt Lake City Conference. The 12 BlogPaws Nose-To-Nose award winners at the 2012 conference in Salt Lake City were asked to vote for one group they wanted to
receive $100 in their name. They chose World Vets, and to honor our wonderful #BlogPawty staff we "rounded up" the donation to $2,000. – BlogPaws Team.]