We adopted Ruby and Lizzie on June 28th from LollyPop Farm, Fairport NY. They are sisters, seven- 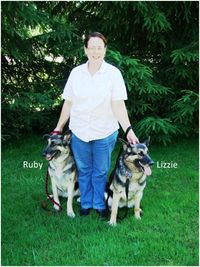 years old German Shepherds and LollyPop was trying to have them adopted as a pair so they wouldn’t be split up.

Since we have over 9 acres of farm and forest we thought they would enjoy being with us.

Though Ruby and Lizzie are not the first dogs we adopted from LollyPop, it’s been a while and I was impressed with their care of the animals.

Each cat and dog is implanted with a locator microchip and when adopted has a 30 day healthcare plan which can be upgraded with an additional 15 days. You also get your first visit to the vet free.

Both Ruby and Lizzie have friendly dispositions and they imprinted on us immediately, especially my wife, Loretta. On the way home from LollyPop, we had to make a couple of stops. The first to a local Volunteers of America store to drop off some books. Both dogs glued themselves to the van window, watching Loretta walk across the parking lot to the store and back. They both follow her around the house. I call them her entourage.

I gave them both rawhide chews. I’ve never seen them fight over them but one afternoon, Lizzie had one and it was apparent that Ruby wanted it. As I sat in the kitchen resting after working in the garden, Ruby came over for attention. Lizzie came from the other room to get in on the action and Ruby immediately went and picked up the rawhide that Lizzie left behind. Smart!

My wife and I look forward to many years of enjoyment and adventures with our new friends.

2 Responses to “Ruby And Lizzie Find a New Home: The Joys of Adoption”