Telling stories can be a powerful way of engrossing your readers. As Maggie Marton has written before in this fabulous BlogPaws post, the brain is actually wired for storytelling! But there’s a big difference between a decent story and a compelling tale that engrosses your readers and truly stands out. After all, in an increasingly noisy world, the powerful stories are the ones that get noticed and shared. 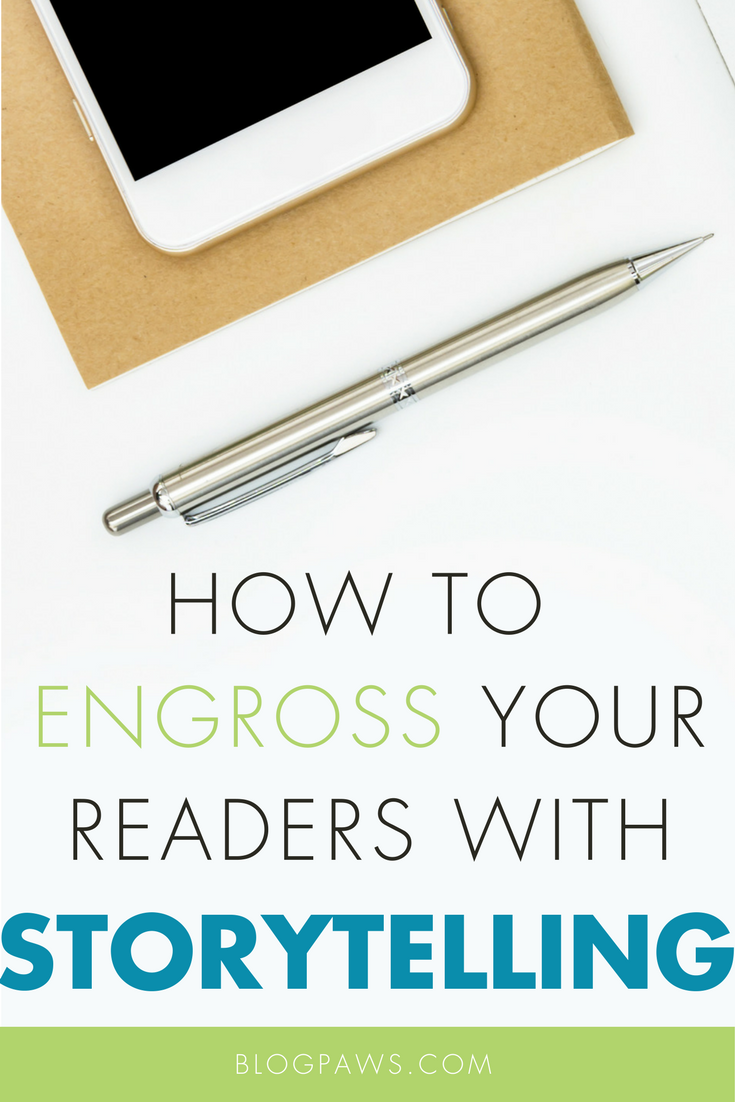 As a writer who used to work as a contest editor at a literary magazine that attracted thousands of entries, I know what it takes to make a story memorable and engaging. Of course, knowing the basics is key. For now, let’s have a quick recap, in the form of a list. (You can skip this list, of course, if you feel confident!)

A successful story should:

Now, here are a few ways in which storytellers who’ve mastered the basics can improve their storytelling:

A great way to stand out as a storyteller is to engross your readers fully so that they feel as if they are actually experiencing your story firsthand, like watching a vivid film. Examine how you use your senses, particularly sight, to immerse your readers in your stories. In the writing world, this is often called writing “in scene.”

In fact, story openings that are written in scene can be a great way of hooking your reader. So, let’s look at an opening that could benefit from being more in scene:

“One day, we had a flood when we were out of the house. Our pug Sidney, unfortunately, was at home at the time. We found him behind the sofa, scared stiff.”

Let’s try starting in scene instead by appealing to the reader’s visual sense. The goal is to make them feel as if they are in the room at the time, seeing what Sidney and owners are going through:

“The day of the flood, we arrived home to find the whole apartment ankle-deep in water. Terrified, we waded through our home, searching for our pug Sidney, who we eventually found behind the sofa, trembling, his fur drenched with water.”

This is now a stronger beginning because it shows us both the flood and poor, terrified Sidney! If you wanted, you could appeal to other senses, too, including the coldness of the water or the sloshing sounds. By writing important moments in scene, we hook the reader easily because they are right there with us—being shown and immersed, rather than simply being told.

A great way of creating a compelling story is by building suspense. It is easy to assume that, in order to build suspense, we must speed up the story’s action. But this often isn’t so. Suspense is typically created by slowing the story down at pivotal moments so that the reader must sit in the central conflict without knowing for sure what the outcome will be.

Let’s use Sidney as an example again. (Poor Sidney!) Originally, we had this opening:

“The day of the flood, we arrived home to find the whole apartment ankle-deep in water. Terrified, we searched everywhere for our pug Sidney, who we eventually found behind the sofa, trembling, his fur drenched with water.”

“The day of the flood, we arrived home to find the whole apartment ankle-deep in water, and Sidney, our sensitive pug, nowhere to be seen. The first thing I thought was, ‘Oh no! Has he drowned?’ And given that we spent at least ten minutes wading through water, searching Sidney’s favorite haunts, you can understand why we were terrified. Sidney, our rescue dog of a ripe old age, who suffered with heart difficulties, having been badly treated for years, was a beloved member of our family. What if, once we found him, he wasn’t breathing?”

In comparison with the earlier example, you can see how we’ve slowed down the action. In fact, we haven’t even found Sidney yet! The same activities happen in both openings, but in the second, the reader now has to keep experiencing the emotional obstacle—Sidney being in danger—without being granted immediate release.

This increases the impact of a happy ending, too! The longer your reader has to wait to find out what happens, the more attached they’ll be to the outcome.

Another thing we did in the previous example was spend time building an emotional connection. As pet bloggers, we know that human-animal relationships are often so deep, so it doesn’t take much to build emotional closeness during a scene.

In the previous example, when we were building suspense, we also built an emotional connection to Sidney and his owners. Just the words, “Sidney, our rescue dog of a ripe old age, who suffered with heart difficulties, having been badly treated for years, was a beloved member of our family,” raises our awareness of Sidney’s powerful connection to the blogger, and makes us fear for him and his owners all the more. The details of Sidney’s difficult past and tender health help the reader share an even closer bond with him. Therefore, they feel the suspense more keenly.

Another way of building an emotional connection is by showing Sidney to the reader once he is finally found. Who can resist a brave, trembling dog, who has survived it all? I know that when my partner and I had a flood and got home to discover our own rescue dog, Lilly, quivering on her soaked bed, there was such longing in her sad, dark eyes that we raced across the room, sending water everywhere! So why wouldn’t I give that powerful moment to my reader, allowing them to get experience it, too? Plus, this sort of emotional connection can make the ending (where the obstacle, or conflict, is overcome or laid to rest) all the more satisfying.

Such an ending often makes a story stay with us.

And when a story stays with us, we share it.

Sue Williams is a writer, editor, and ghostwriter who has been published at Narrative Magazine, Psychology Today, Spirituality & Health, and elsewhere. She loves animals, be they furry, webbed, or winged, and has been a proud parent to three dogs and two cats. Sue, who comes from the UK, now lives in Massachusetts with her partner Jake, and has published an award-winning, young adult novella called, The Winged Hendersons of Welton-on-Sea. Her website: www.suewilliams.co.uk.