Recently, our own Chloe DiVita sat down with an amazing man who has been on the scene of animal care and welfare for decades. He cares as deeply about the welfare of animals everywhere, as much as we do, at BlogPaws. I am personally amazed that this is the first I am hearing of him. 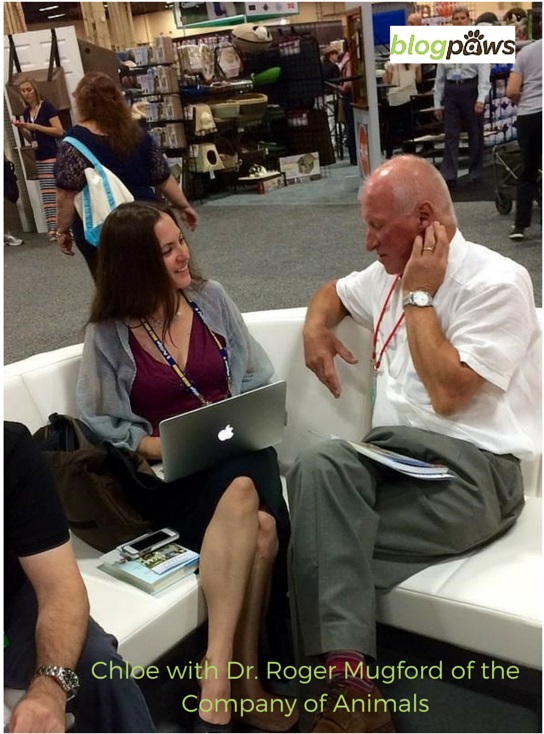 This is Roger Mugford

The man is Roger Mugford. His company is called Company of Animals. The story, and the interview Chloe did, is worth of our attention. Listen up…

Dr. Roger Mugford comes from a background in farming. Within the context of having farm animals, he began to wonder: why do people keep pets? “What are the payoffs?” he wondered.

Certainly, the cost, inconvenience, hygiene (did you pick up your dog’s poop yet today?), and more, there is reason not to have a pet. How do the positives for pet parentship (ok, some people want that to say pet ownership…sigh…and we include them here, also…they generally don’t mean ‘ownership’ as in ownership of an object…they mean their pet is theirs – they own the pet; at least we hope that’s what they mean…but I digress…) outweigh the negatives?

Dr. Mugford shared a study which was done in academia where elderly folks (in a nursing home) were given a parakeet or a house plant, to keep them company. He said, “People with birds showed positive things: maintenance of competent speech, friendships, and visits per week. The elderly with pets had more friends, were happier and kept their speech.”

Animals Give Elderly Reason to Live

Reading this article in Changing Aging.org, I learned much the same thing when a study in a nursing home which allowed dogs, cats, parakeets and even a garden out back, resulted in more activity and engagement for the patients. It showed that our elderly respond to animals because animals “[provided] them with reasons to live.” Yes, even parakeets!

Dr. Mugford believes big animals, like dogs, do this in a “more dynamic way.” It shows that we need the company of animals, and hence, it convinced him to name his company, established in 1979, The Company of Animals.

Dr. Mugford was a scientist. He worked ostensibly to understand the dynamics of the human animal bond. And to sustain the tradition of keeping animals as pets. He notes the study above when talking about the power of animals in our lives. To that end, haven’t we all experienced the despair of loneliness, and the unhappiness it generates? When left alone too often, we humans drift into cognitive decline, because… it’s easy. When animals are involved, there is necessity to perform daily tasks, take care of another being, accept joy in our lives – the joy we see in our dog’s or cat’s eyes when we return from being away or … even just going to the store. That’s what I think, anyway. 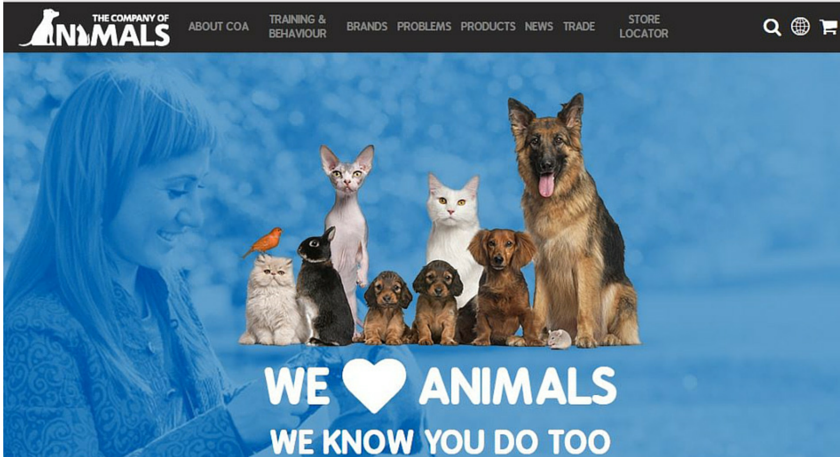 First Do No Harm

The Company of Animals exists to “do no harm.” The seriousness around pets that misbehave – dogs that are aggressive to people, dogs that bite, and dog on dog aggression, was something that concerned Mugford. He “thought he should be creating a body of knowledge that people can use to get help.” To facilitate this he met with clients, met with veterinarians, and discussed how to deal with this concern. Over time, one answer was to invent the Halti – a harness that is used on a dog’s head, similar to halters used on farm animals, something he was familiar with from his youth, growing up on a farm. The design is a hybrid, with sales over 20 million.

Just as many of us, Mugford believes in reward based methods of training. He wants to keep it simple, uncomplicated. Dogs do what they do because there is a benefit to them. There are, Mugford says, “…social hierarchies and dominance in dogs. To say the idea of dominance is old fashioned is BS; just stupid,” he says. “It’s denying the dog.”

The brain reacts to feelings, and dogs have that, he says. When a dog sees their owner, it makes them happy. Therefore, to train the dog properly, you use the concept of privileges. Punishment One is ignoring the dog. Punishment Two could be using the word “wait” or denying access to a privileged position (next to Tom on the bed, at our house, for instance). Punishment Three could be using a HSSSSSH sound. (Popularized by others, but the noise has been used by many). Another punishment that uses “privileges” is delaying rewards.

As with many of us, Mugford sees animal care and welfare as a worldwide issue.

He feels that poor countries need more help. He feels than puppy mills are a NO!

In the end, he’s created a successful brand that works to help others understand pets, while it also provides products to aid in that focus. For instance, the Pet Corrector to correct barking. Or, the Anxiety Wrap to “lessen fear, anxiety, hyperactivity, insecurity and shyness.” And, of course, the Halti, which is designed “to combine maximum steering efficient with unequalled comfort for the dog.”

Dr. Roger Mugford continues to share his expertise via his site and his 100 acre farm in England. The site says, “The primary drive for our company has always been to develop products that help owners and their pets find an enriched life and to improve animal welfare.”

Today, COA has suppliers, distributors and partners in over 42 different countries.