Over the past five years, I’ve worked my way down at Madison Square Garden. As a long-time fan of the Westminster Kennel Club Dog Show, which airs each February for 2 nights, live from Madison Square Garden, it has been my dream to one day attend the show. Armed with that dream, some tenacity, and a focus on a career in the pet industry, I am fortunate to cover this show each year as a media member.

Several years ago, I was thrilled to simply sit in the arena where canine royalty would traipse for two evenings. Those nosebleed seats did not matter; I was there, in the hub of it all. Each year, I would get closer and closer to the “Garden Green,” where the dogs make their mark. As the dogs prepare to strut their stuff, the unintentional interaction is what makes me smile the most. To sit in the media area and be able to report live for social media and to file this report on the blog is quite the dream come true. 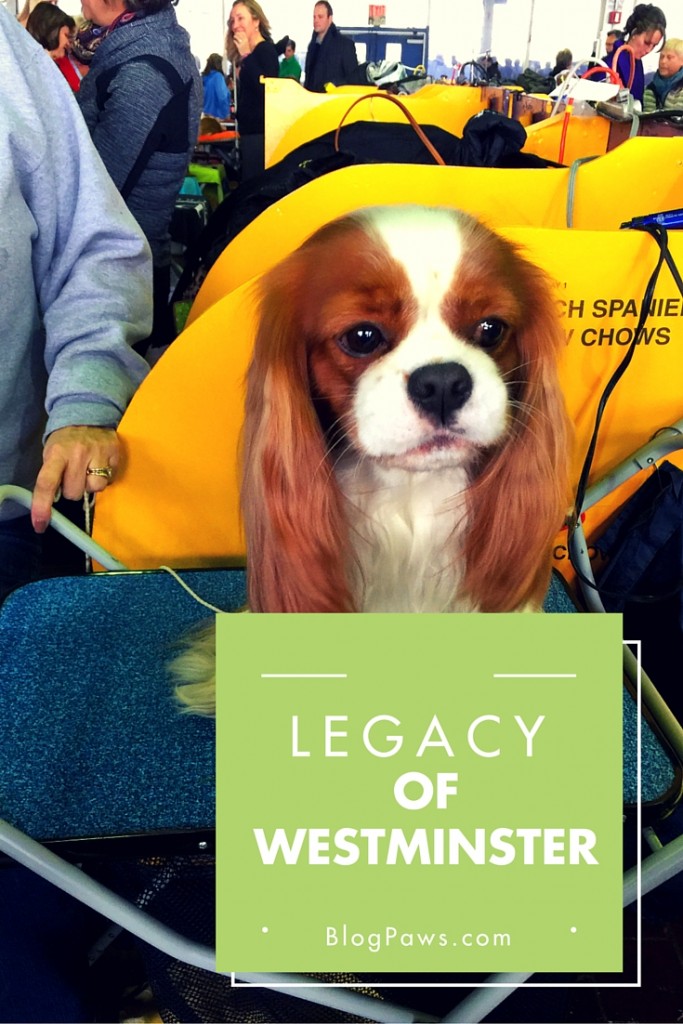 Why Dog Shows At All?

Dog shows like Westminster Kennel Club matter. “Conformation” is the official name for “dog shows.” When you see the handlers posing (stacking) the dogs, this is to showcase the dog’s overall structure and appearance so that they can be properly judged. Judges are not comparing the beauty of one dog against another; they are judging the dog’s conformation. In turn, a properly conformed dog will produce quality purebred puppies. Mixed breeds do not compete for this reason and neither do neutered or spayed dogs. People show dogs for a variety of reasons. In general, anything short of true dedication is bound to fail.

Each year, I get the warm fuzzies when visiting Hotel Pennsylvania, directly across from Madison Square Garden. Many of the dog show dogs stay there, and at times, the check in line meanders to the entrance of the grand hotel. Stacked in piles of the lobby are copies of the Canine Chronicle, a monthly dog show magazine. In it, dog show vanity ads appear along with a variety of articles about the sport. Here is a sampling below, but this is a must read if you are attending a dog show like Westminster. 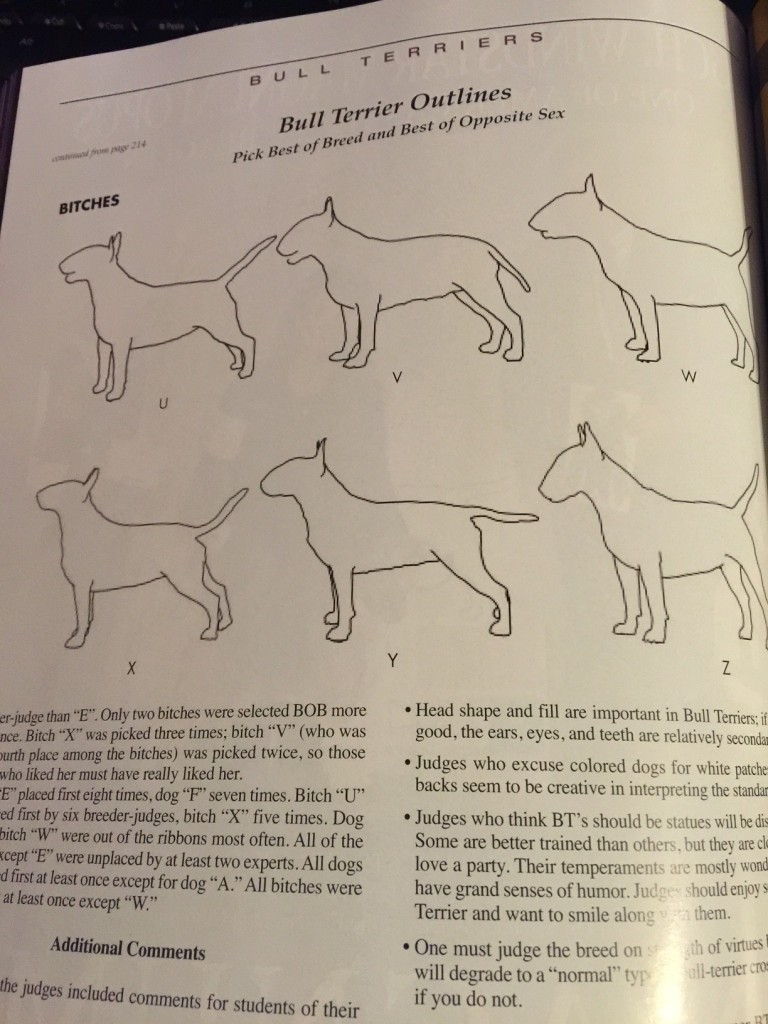 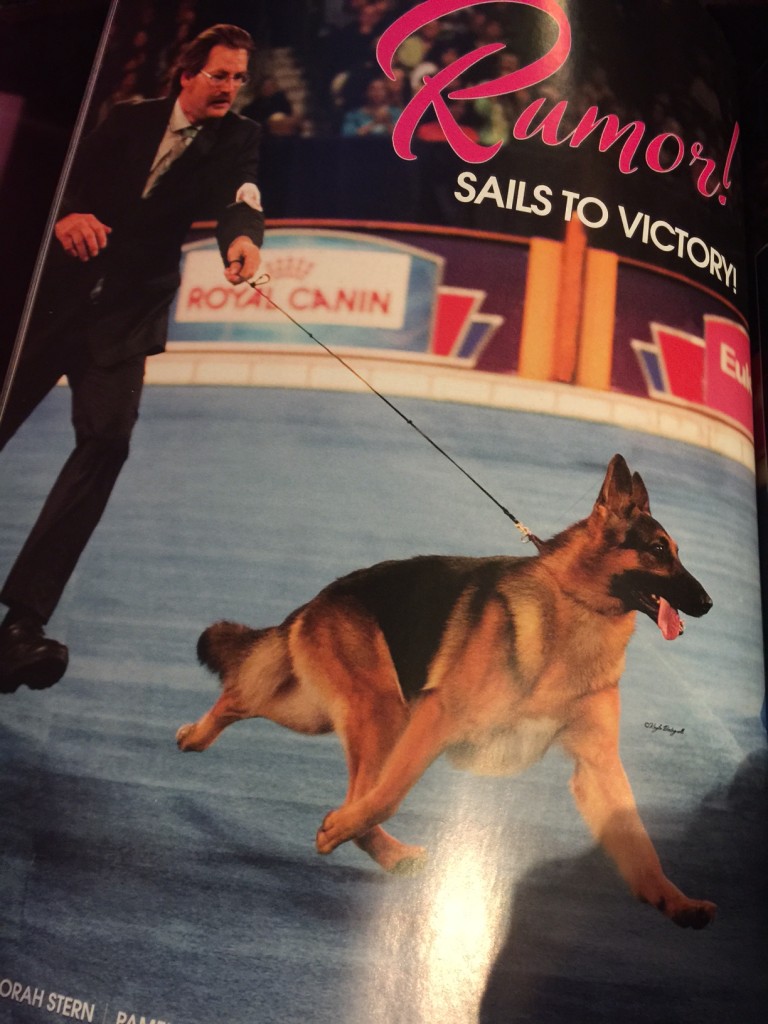 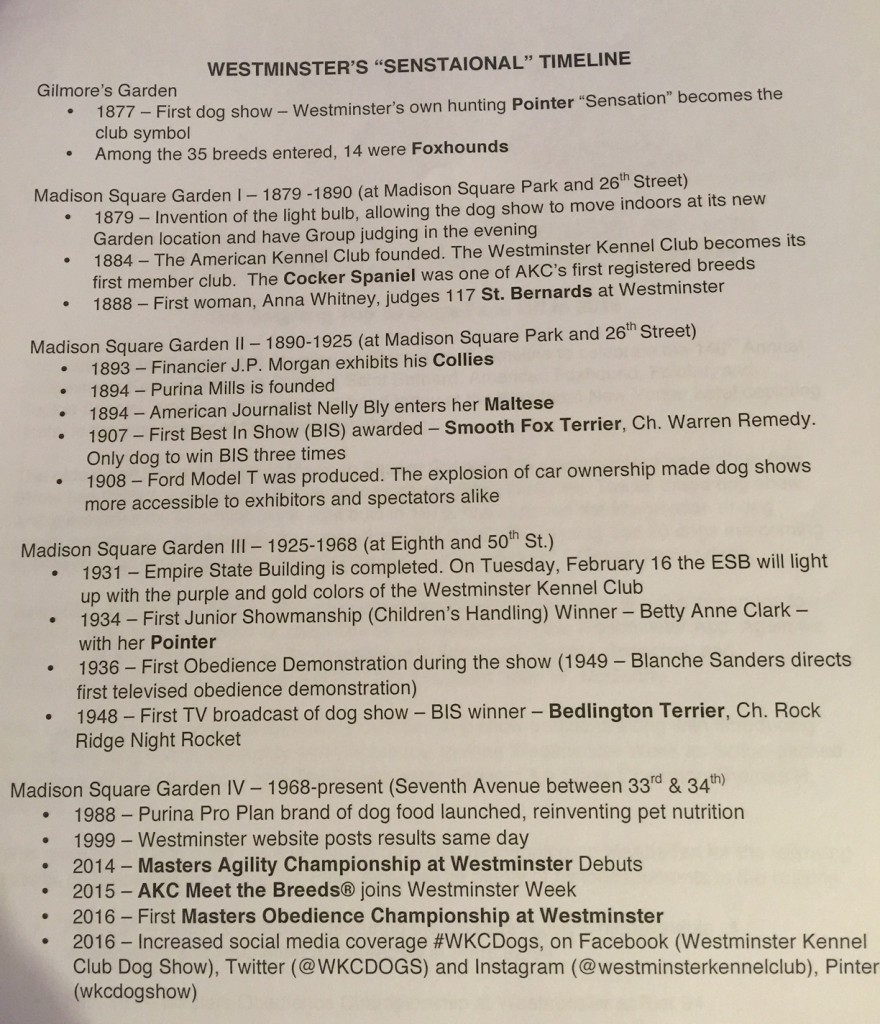 1904 is the first time handlers wear arm bands with the catalog number of their dog.

David Frei, the Voice of Westminster

In 2013, the famous David Frei, Voice of Westminster, was the official celebrity emcee of the Nose-to-Nose Social Media and Pet Blogger Awards in Tyson’s Corner, Virginia, during the BlogPaws Conference.

Frei is the public spokesperson for the Westminster Kennel Club and has been the television voice of Westminster since 1990. With Westminster, David helped create Angel On A Leash, a charitable activity dedicated to creating and administering a therapy dog program at the NewYork-Presbyterian Morgan Stanley Children’s Hospital. Angel On A Leash later became an independent charity with David as founder and president, and the program has expanded into a number of additional facilities across the country. The success of the program provided the inspiration for his book of the same name.

Frei is well-known to millions of television viewers as the longtime co-host of USA Network’s annual telecast of the popular Westminster Kennel Club Dog Show, which airs every February. Frei has also been the co-host of The National Dog Show presented by Purina, a telecast seen by nearly 20 million viewers every year on Thanksgiving Day. 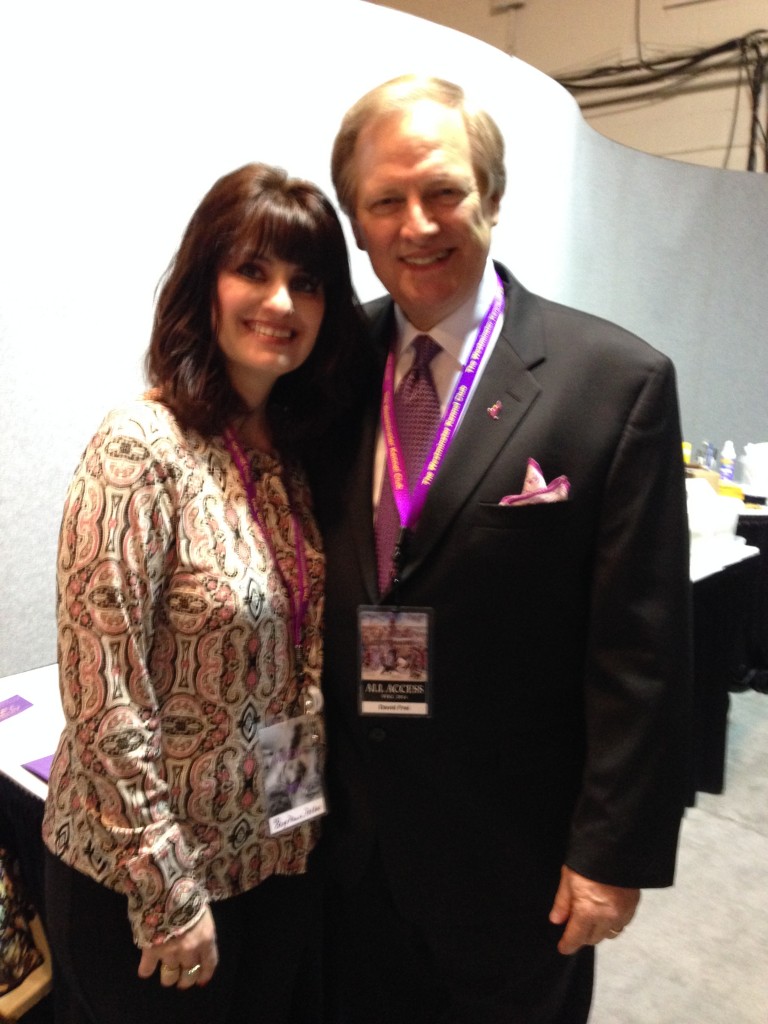 Replacing Frei is Gail Miller Bisher as Director of Communications for The Westminster Kennel Club. Bisher has more than 30 years of experience in the dog world as a handler, trainer, writer and spokesperson. She is an AKC-licensed conformation judge and Canine Good Citizen evaluator, with a background including conformation, obedience, herding and earthdog trials. 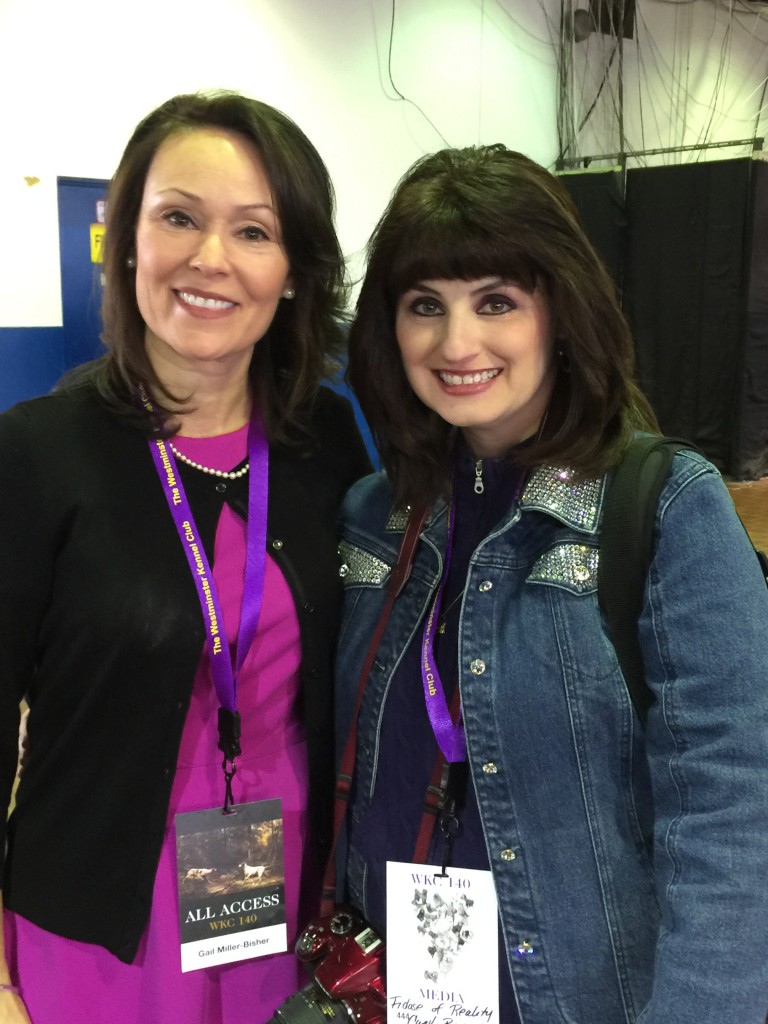 Westminster is one of the few clubs that holds a “benched” dog show. Dogs are literally staged on benches by breed in order to compete over the course of two days every February. If you purchase a ticket to attend a benched show, you can talk to the folks who are the owners, breeders, and handlers of the dogs. This year, 199 breeds were shown at Westminster. 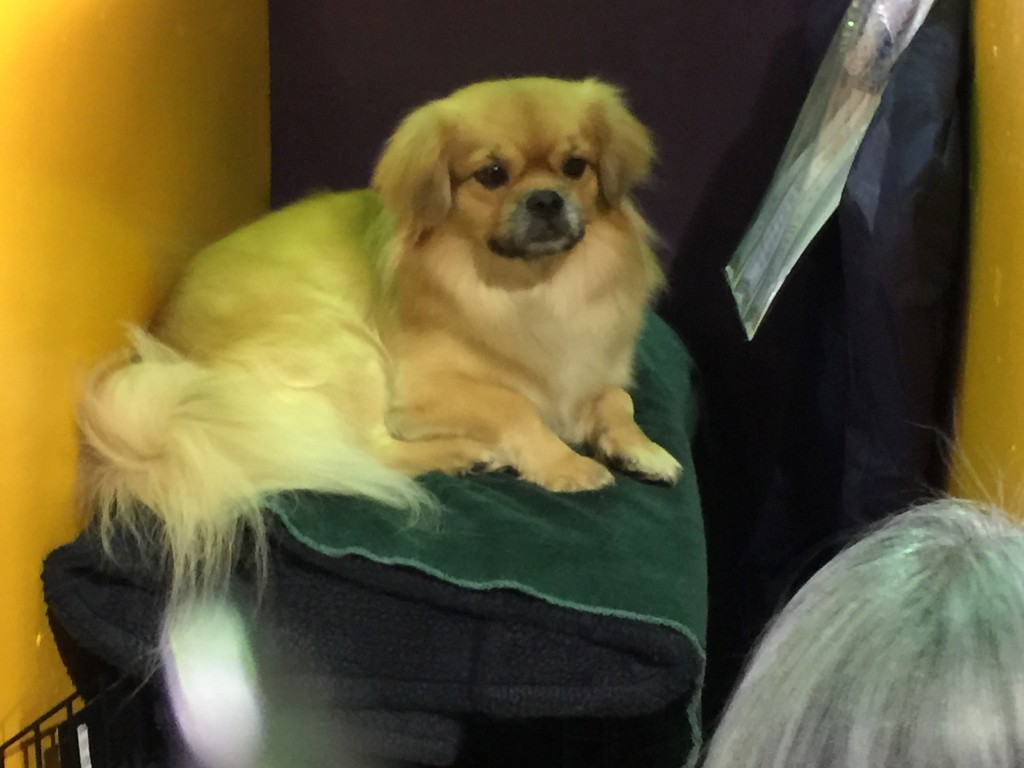 Breeds and varieties that will compete include the Hound, Toy, Non-Sporting, Herding, Sporting, Working, and Terriers. The Best in Show rounds out the competition, with all seven group winners taking to the “Garden Green” on Tuesday evening, February 16th.

The 2016 Best In Show Trophy was awarded to “GCH Vjk-Myst Garbonita’s California Journey” a.k.a. “CJ,” a Pointer (German Shorthaired) 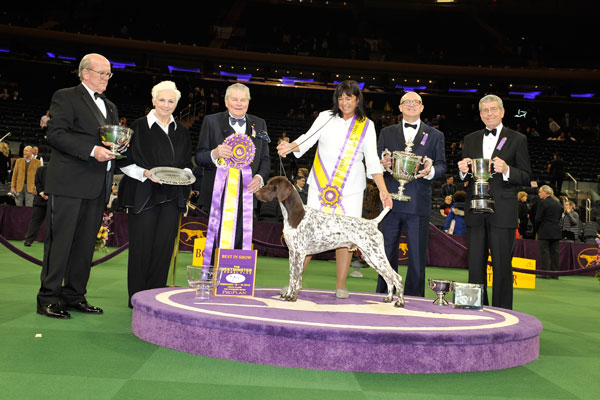 What The Camera Does Not Show You

One of the most incredible aspects of attending a dog show is that you get to see things that perhaps the television camera does not capture. Here, then is a pictorial and a 15-second video clip that sums up the love of a handler and his show dog. Enjoy. All photos credit to Carol Bryant, Fidose of Reality. 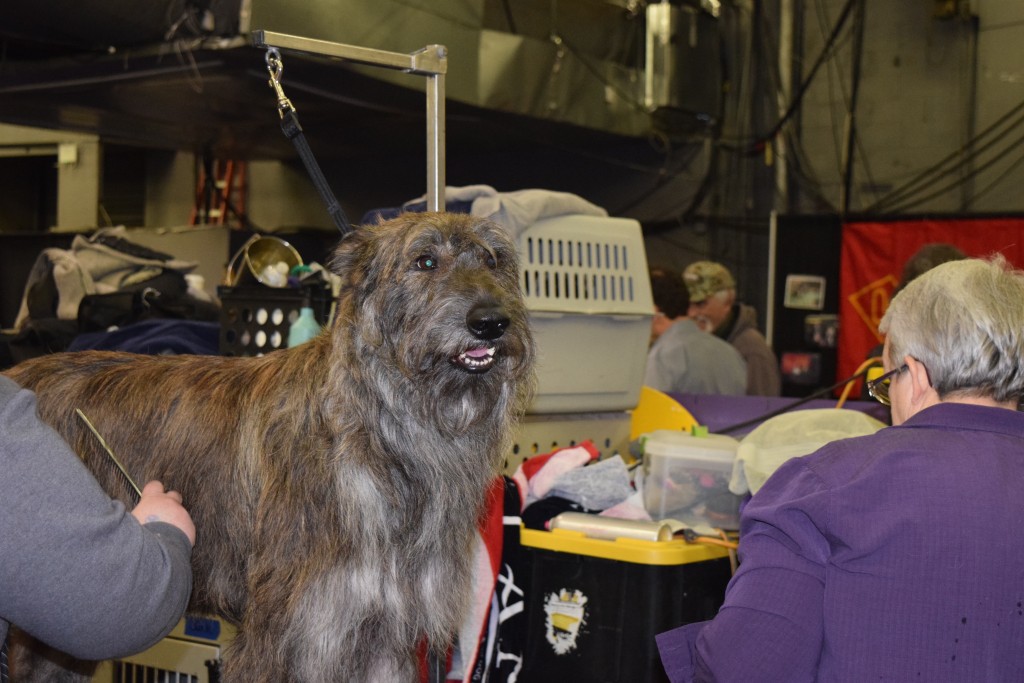 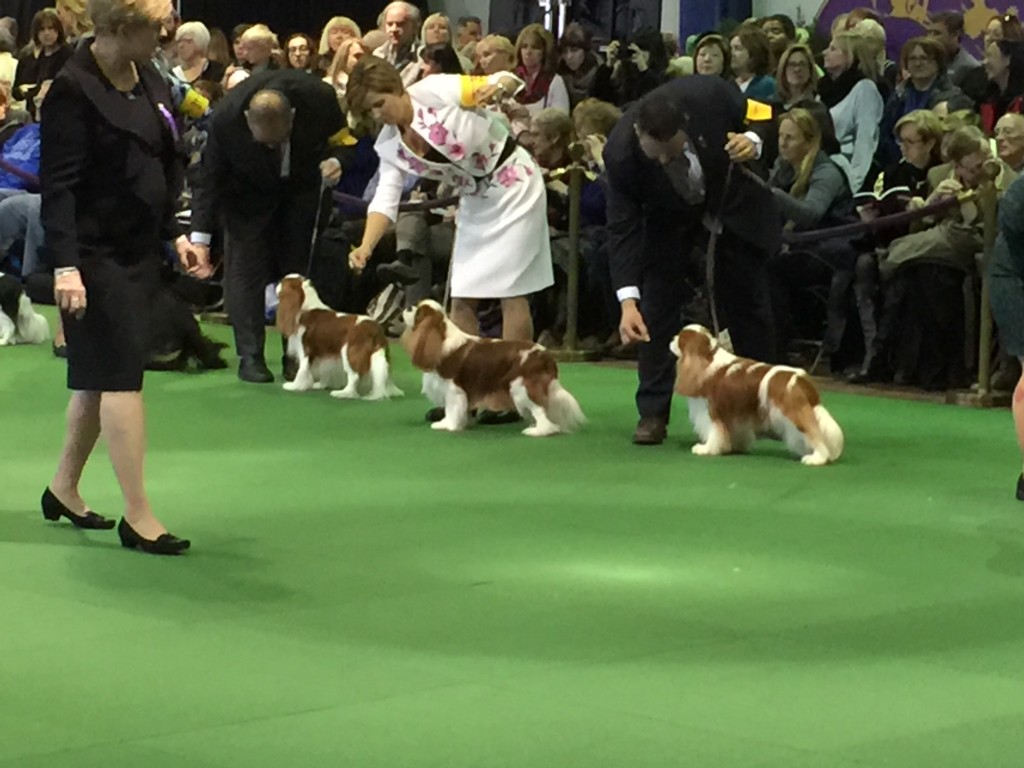 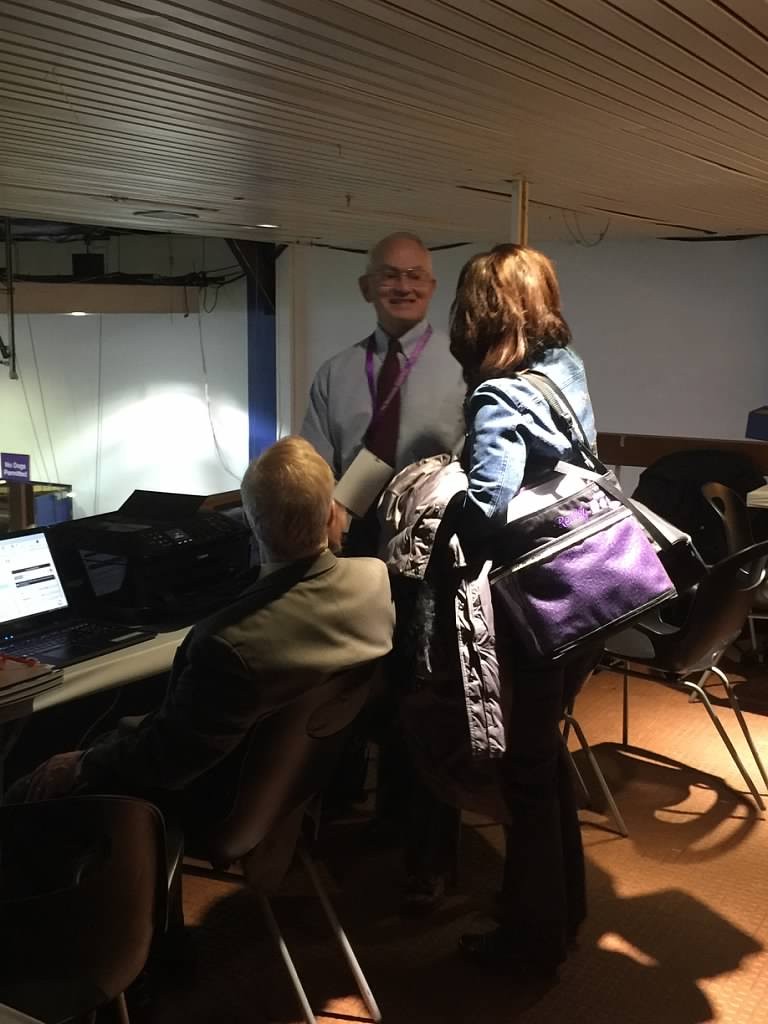 Me in the media room with media pro, Ranny Green 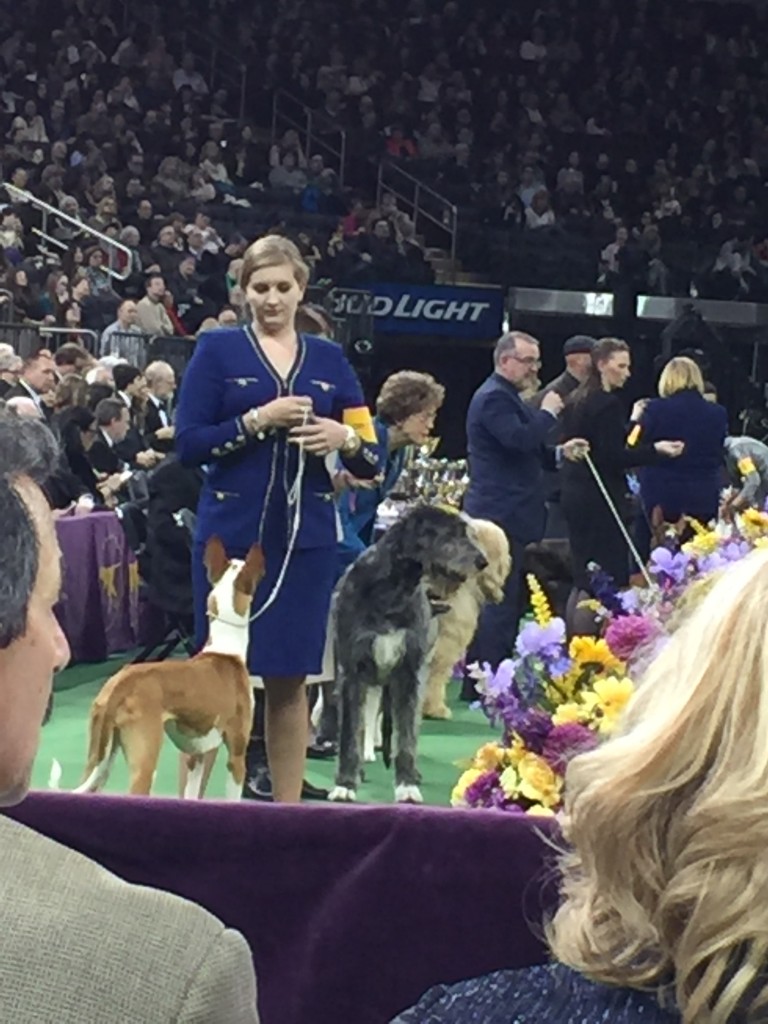 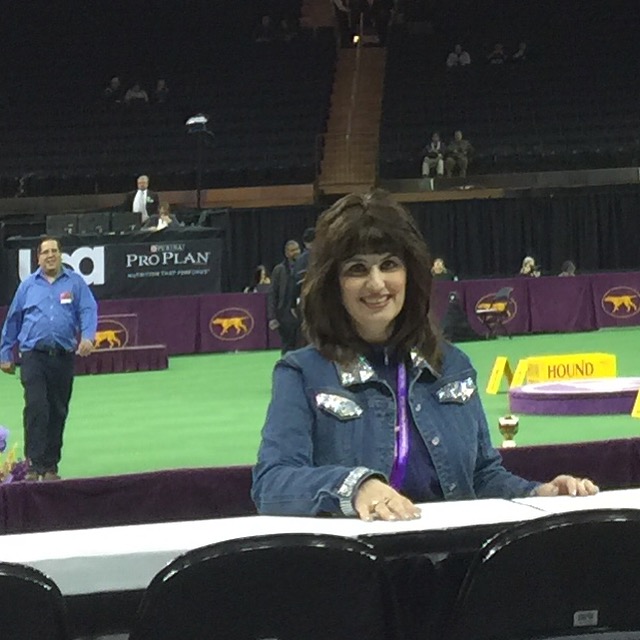 I love working this show! 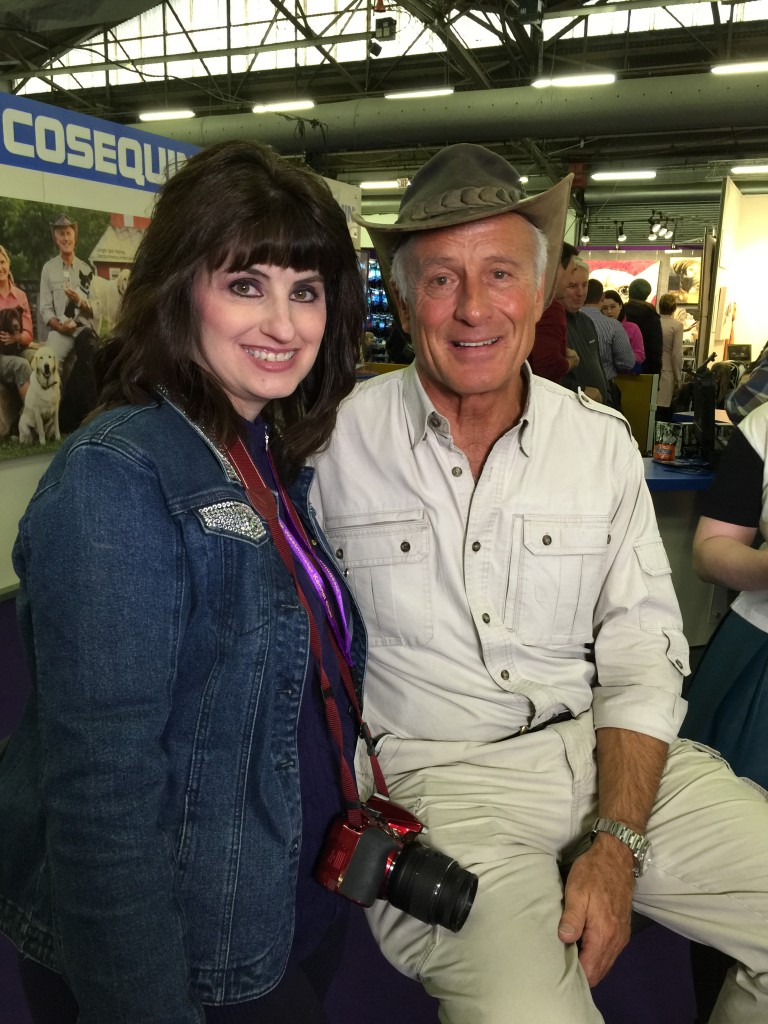 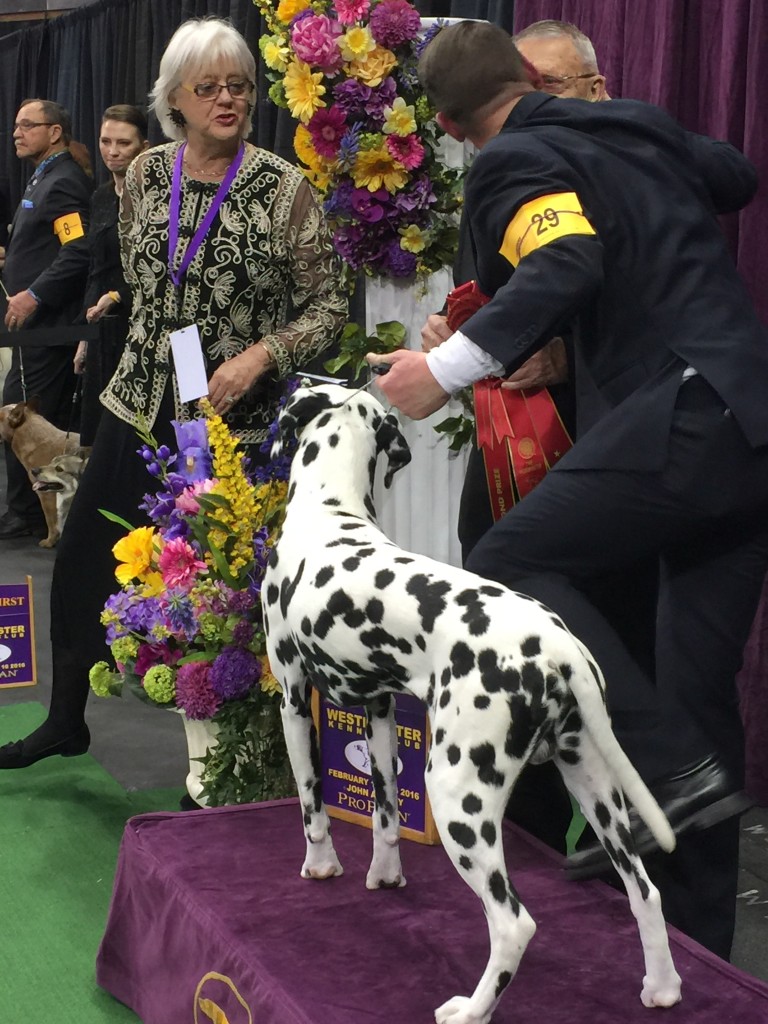 Right after a win

We love what this handler says about the love of his winning show dog at #wkcdogshow this year. #dalmatian #woof #dogshow

Did you watch the dog show? What was your favorite moment?

About the Author: Carol Bryant is the Marketing and Social Media Manager for BlogPaws and runs her own blog, Fidose of Reality and its fundraising arm, Wigglebutt Warriors®. When not busy playing with her Cocker Spaniel, Dexter, she stays far away from cooking. Her trademark is her mantra and is tattooed on her arm: My Heart Beats Dog.®