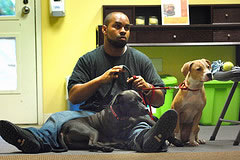 This week’s resource is a BIG one that I’ll come back to often for specific examples and links: images created by the government.

The photo here comes from The U.S. Army’s Photostream on Flickr, with the caption, “Homeless dogs help healing troops.” When you click through to the individual image, they’ve provided a nice little summary of the story behind the photo:

Capt. Lawrence Minnis sits with his two adopted pit bulls at the Washington Humane Society’s Behavior and Learning Center, Nov. 12, 2009. Minnis met the dogs through the humane society’s Dog Tags program, in which Soldiers recovering at Walter Reed Army Medical Center sign up to help teach animals housed at the shelter learn how to behave.

The image also carries a Creative Commons “By” License (you’re free to use the image, but with attribution to its creator). It’s my understanding, however, that images created by government employees as part of their job are inherently in the public domain. The Army’s website images page seems to acknowledge as much in a footnote: “Images on the Army Web site are cleared for release and are considered in the public domain.” The footnote also says: “Request credit be given as ‘Photo Courtesy of U.S. Army’ and credit to individual photographer whenever possible.”

On the other hand (you knew there’d be another hand, right?), I practiced law long enough — litigation, not intellectual property — to know there are probably dozens of wrinkles, exceptions, and caveats to the general rule that government images are public domain. One potentially thorny caveat is mentioned in the FAQs on the Army site: “Army imagery is provided without talent releases on any individual portrayed. Imagery is provided with the understanding that the Army has no authority to waive the privacy rights of any individual depicted in government media.” Whether or not any individual who is doing their job as a public employee, or others who might be shown in a scene depicting a public event, can have any privacy rights to worry about is wa-a-a-a-y beyond the scope of this post (and my expertise). Any IP lawyers out there want to weigh in?

The Army’s request for attribution brings up another point that I’m happy to offer my advice on: Even if an image or other work is in the public domain, or you have a license to use it, you should give credit (and a link, if possible) to the original author or creator. Otherwise, you are likely to be understood as claiming it as your own work. And as explained on the PlagiarismChecker.com site, quite distinct from copyright infringement, that’s plagiarism.

Note the “quoting from Shakespeare without attribution” example in the PlagiarismChecker post. Most people would recognize that as being dishonest, even though the works have been in the public domain for centuries. The same should apply to Army photos, your work, or mine, even though they’re in the public domain, or (especially when?) we may be generous enough to license or donate the work via Creative Commons.

Such legal/ethical myteries aside, it’s great to find the Army’s images on Flickr for a couple of reasons. The search tools on Flickr make it relatively easy to find images you can use. Once you’ve found a photostream you like, such as the Army’s, you can search within it:

And if you REALLY like a particular photostream’s set of images, there’s a tool in Flickr (in the screenshot here, it’s a link, just above the image title “Man’s Bestfriend” at the right side, partly cropped) to turn it into a slideshow that’s embeddable on your blog:

Where do you go to find free images for your blog?