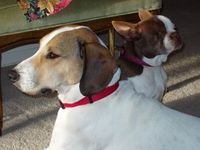 While this post will mention one political figure running for election, the post is not a political stance. It's an "I love my pet" stance. My hope is to make sure everyone knows this information. I'm amazed at how many good people with pets, especially beloved dogs, don't know about it. To me, it's important. It should inform anyone's decision on voting in the fall.

When I read about Mitt Romney putting his dog, Seamus, on top of his car, in an "air-tight kennel" whatever that means (air tight – so he couldn't breathe? or air tight so the wind couldn't get in or what?) on top of his car and drove for 12 hours with his family inside the car…for vacation… I was more than appalled. I was astonished. Who would do such a thing?

Worse yet, who would do it and then defend it? Read on.

This is not a new story. It broke in 2007 – and it's come back to haunt Romney, and rightly so. Those of us with pets are making sure this story continues to be covered. We want everyone to hear it, read it, understand the implications. To me – it shows a man who doesn't value the love and affection of his dog. Others have said it shows a lack of character. If he would do that to his dog ( "We loved the dog," he's quoted saying, "it was where he was comfortable and we had five kids inside the car and my guess is he liked it a lot better in his kennel than he would have liked it inside."), it seems likely he'd make other poor judgements on behalf of the 'humans' he would represent in office. Whatever office that 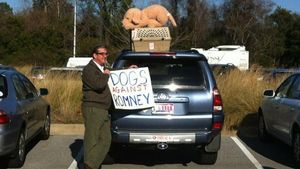 No, I am not a fan of Mitt, as you can tell. But, that's not what this is about. My feelings aside, this story will not die because it should not die. Scott Crider, a guy in Gulf Shores, Ala, created a blog called Dogs Against Romney, where you can get a ton more information and follow the story as it trends around the net. The pictures here are from Scott's site. He's committed to showing the world, and Mitt Romney, how real families treat their dogs on vacation.

According to this quote from Michael Markarian of the Humane Society Legislative Fund, from an NPR story, "Two-thirds of American households have pets, and the pet care industry is a $51billion a year industry. That's more than movies, recorded music and video games combined." And many of them won't vote for someone who they perceive mistreated his dog, regardless of party. 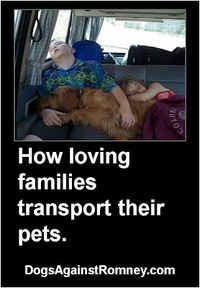 Just recently, a small group of protesters gathered outside of Westminster to show support for the movement to inform all dog people and pet people that this treatment, regardless of when it happened, is unacceptable.

If you're just learning about this from this post, today, I hope you'll visit the links, read about it around the web – don't just rely on my words. I hope you'll make an informed decision to share it. I hope we, the pet people of the world, can use our collective voice to stand up for our pets.

As Scott of Dogs Against Romney says, "Pets ride inside." Not on the top of the car. Seriously.