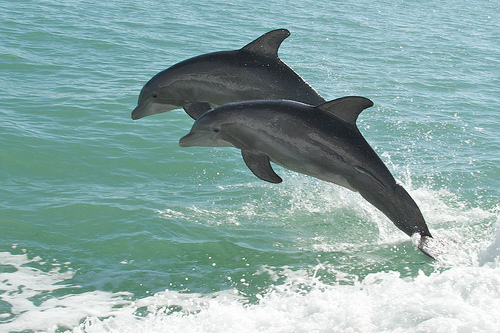 You have probably heard stories of dolphins saving humans. On March 5th, 2012, German tourist Gerd Traue filmed an extraordinary event while on vacation in Arraial do Cabo, Brazil, in which the favor was returned.

Everything seemed normal at 8:00 am, when suddenly a pod of about thirty dolphins stranded themselves right in front of dozens of beachgoers.

This dramatic video begins with a beautiful shot of the ocean. Then a pod of dolphins appears! The dolphins come closer to shore, and then too close. Obviously something is wrong. After just a few seconds of confusion, we are witness to the spontaneous rescue of every last dolphin by the people on the beach, pulling and dragging them all back into deeper water, where they swim back out to sea. A breathtaking display of interspecies altruism.

There are differing speculations as to why the dolphins were stranded. The Huffington Post cited scientist Dr. Darlene R. Ketten suggesting they might have been caught in a strong current too near the shore, but there's really no way of knowing what happened.

While Dr. Ketten commended the good Samaritans, she also pointed out that rescuing dolphins could be risky. You can see the dolphins thrashing about in the video, and that someone – of either species – might have been injured, or worse.

As it turned out though, it was a happy ending and a day one group of people and one pod of dolphins will never forget.