According to a press release from the Human Society Silicon Valley (HSSV) more than 5,000 dogs and cats nationwide found homes this past weekend at the country’s largest free pet adoption event, Maddie’s® Pet Adoption Days, sponsored by Maddie’s Fund®. The HSSV  participated in this annual by finding new, loving homes for 308 local dogs, cats and bunnies. As a result of the adoptions, Maddie’s Fund has awarded them an estimated $180,000 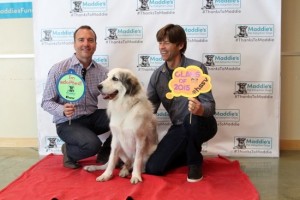 in grants. This weekend’s adoption total beats their prior record of 240 adoptions in one weekend.

“It truly takes a village!” says Carol Novello, President at Humane Society Silicon Valley. “… Our community came together and opened its hearts and homes for 308 animals in just two days. We are deeply grateful to Maddie’s Fund® for each of these adoptions, and for further empowering us to advance our mission ‘To save and enhance lives.’”

Maddie’s Fund President Rich Avanzino said, “We are on the one-yard line to achieving our goal of a no-kill nation. Events such as this help bring attention to the amazing companions who are waiting to find their wonderful homes in our nation’s shelters. We congratulate the groups on a successful event, and applaud the thousands of people who opened their hearts and homes to a shelter pet this weekend.”

Inspired by one family’s love for a Miniature Schnauzer, Maddie’s® Pet Adoption Days has found homes for more than 30,000 homeless dogs and cats since 2010.  For each pet adopted, Maddie’s Fund® gives participating shelters from $200 to $2,500 to cover the true costs of those adoptions.  This funding enables the shelters and rescue groups to save and treat more animals throughout the year.

Maddie’s Fund® founder Dave Duffield said. “It’s a tribute to her legacy and the power of one little dog to inspire a movement and bring communities together to find thousands of animals loving homes.” Maddie was a beloved four-legged family member of Dave Duffield, founder of Workday® and PeopleSoft, and his wife, Cheryl.  For the last five years, Maddie’s Fund®, their family foundation, has sponsored Maddie’s® Pet Adoption Days to honor her memory.

Find out more at the HSSV site.