Recently I assisted a company called Art-Casso with the launch of their one-of-a-kind pet video contest. Art-Casso is a small online retailer that sells NO MESS paint kit for pets that allows dogs and cats to paint with their paws and/or body. 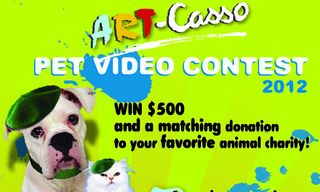 The company was originally founded in 2006 with the idea that pets and owners could create paw paintings to cherish without making a mess. Joanna Sasso is the Company’s new president who's goal is to revitalize the Art Casso image. She believes that the animal-human bond can be enhanced through this interactive paw painting activity. What better way to create awareness of these products than with a promotion such as this video contest?

To participate, individuals must first visit the Art Casso Facebook page and Like the page to become a fan. They will then be given access to the contest application which contains a special limited-time, Facebook Fan Discount Code that can be used on Art-Casso’s website to purchase a pet paint kit. After receiving the product they then create a video of their dog or cat painting with the kit and then come back to the contest application on Art-Casso’s Facebook page to submit an entry form along with their video.

Video submissions should be no more than one-minute in length and will be accepted up till March 11. At that time a panel of judges that includes Art-Casso President, Joanna Sasso, Celebrity Pet Expert, Charlotte Reed and Givenik Marketing Associate, Ben Cohen will review each submission and select three finalists. “Judges will determine the winner based on pet and owner interaction, creativity of the video and how the duo best highlight the essence of the non-mess paint kit,” says Art-Casso President, Joanna Sasso.

The videos of the three finalists will be featured on Art-Casso’s Facebook page around March 15 and then the public will be invited to vote for their favorite painting pet video up until March 31. The grand prize winner should be announced on April 1.

This promotion is a great example of how you can drive people to both your website and your Facebook page. The contest helps create awareness of the product, hopefully stimulates sales of the product, increases the Facebook fan base and helps to build a database from all those that submitted their information along with their video.

I am utilizing a Facebook application called Shortstack which is very user-friendly and inexpensive. They offer a free version that you can use to try it out. I will be speaking at the 2012 BlogPaws Conference being held in Salt Lake City, June 21-23, and will be hosting a session about utilizing Facebook Applications for promotions. So I would love to see you there.

In the meantime check-out the contest and try one of the paint kits with either your dog or cat, or both if you're like me and have multiple pets. I'm going to be creating one myself very soon!