“I’m Robbi, a pet blogger, and I work from home. Recently I signed with a major pet company to do its blogging…” Yeah? Who cares? “I’m Robbi Hess, a LOCAL pet blogger, who has been blogging full time from my XYZ home office with my XYZ pets at my side and recently I started working with a major pet company who provides NATURAL FOODS with US SOURCED ingredients…” Hhhmmm. Better, but still not quite there. “Did you know pet parents in the United States spend $62.75 billion dollars a year on their pets? With September 19 being ‘Responsible Dog Ownership Day’ it’s important for new, and current, pet owners to understand what being a ‘responsible dog owner’ means… ”  Tell me more…

As a journalist who worked at a daily newspaper for more than a decade, I know from being in the trenches which press releases would get printed and which would get discarded. If a company sent a release that just touted the fact that they spent $1 million on a new piece of equipment, who cares? If, however, that company mentioned it employed 200 people, had been in business for X number of years, had grown from a two-man operation and that this piece of equipment would help them add more jobs… well, now I am listening. Why? Because that company just made it about the reader, not just themselves. 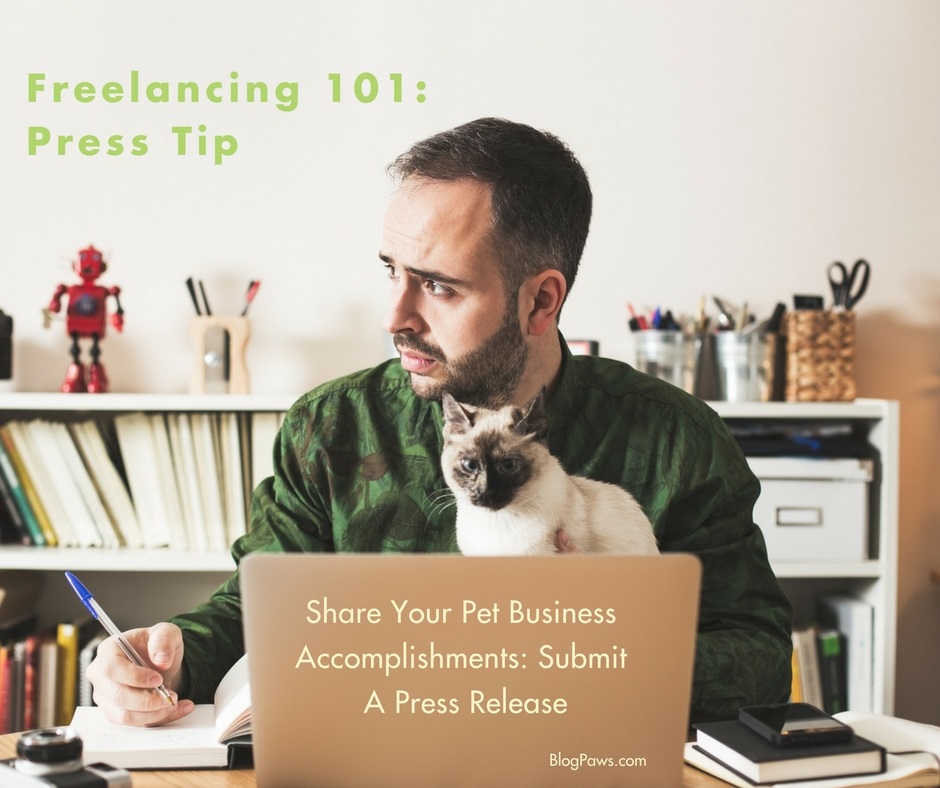 When I moved to a larger daily, the editors didn’t care as much about the company mentioned above unless said company paid for an ad in the paper. In this instance, size of the newspaper played a role in what would and wouldn’t get printed.

With the third sentence (in the paragraph above) you’re getting closer to a reason for writing a press release that a journalist will care about. You’re offering the local press information that its readers can use. Why?

Side Note: If this is for a local newspaper, a holiday that is only two weeks away might be considered timely. If, however, you’re pitching an article or sending a press release to a major news outlet or a magazine, the deadlines are typically almost three months out, meaning you would have to be sending your Christmas press releases now and would have had to send a Responsible Dog Ownership Day press release back in June.

Have you ever wondered, “Am I doing anything newsworthy?” There are a few things to consider. Using myself as an example: I live in a tiny town with one print newspaper, and the journalists are always looking for hometown stories. When I was named an award-winning author, they published my press release. When I was nominated Woman of the Year for WIPIN, they published my release. When I sent the same information to the newspaper in the city… crickets. Knowing your news outlet is the jumping-off point to determine whether the journalists there would care about what you’re doing in your pet blogging business.

Keep in mind, even when you’re touting your successes to the press, you still need to offer information the readers will care about. A newspaper typically won’t print something that is completely self-serving. When I sent the release about my book, I offered tips for other would-be authors (news the readers could use); with the WIPIN nomination, I offered work-from-home advice because it was also Small Business Week (news the readers could use).

This should be a no-brainer. You’ve won an award. You’ve been nominated to sit on a board. You’ve helped rescue and are now fostering dogs from a puppy mill. Your pet won an agility contest. You get the picture. Remember, the size of the news outlet and what’s going on in the news cycle will have an effect on whether your press release gets picked up. Even if you’re touting your award, offer the journalist information that his or her readers will care about. Newsworthy topics to consider: 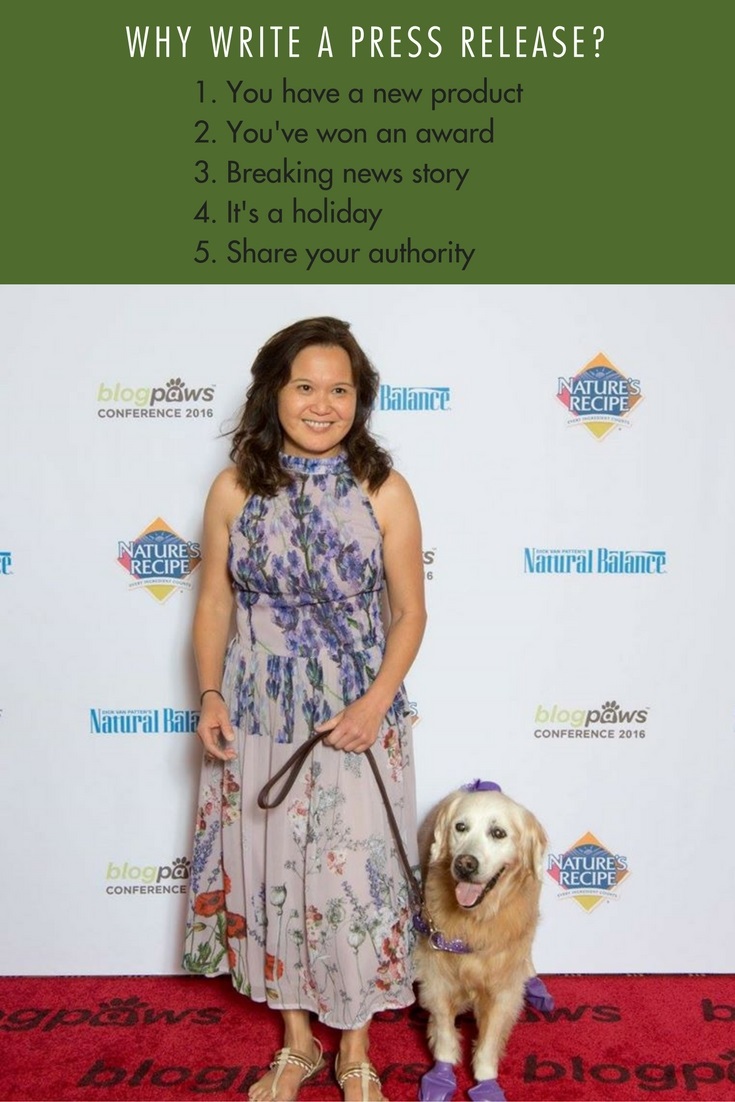 As a pet blogger, there are myriad pet holidays upon which you can jump and send a press release. Keep in mind that the point of the release will be the holiday, BUT you will be able to sprinkle in why and how you’re the perfect person to have submitted this release. Remember, the bottom line with a press release is to get a reporter to pick up the phone and call you to be THE source for the article they are now going to write based on your press release. When I was at the newspaper, we were always looking for an angle on a story we were working on. If your press release on “summer travel tips with the family dog” came across our desk while we were writing about “summer vacation tips for parents,” chances are we would call you to be our source for the pet angle.

Guess what? Just because you’re known in the pet blogging world and to your family, chances are the world outside your door doesn’t know who you are or what you do. If you want to be seen as an authority on a particular subject, write a press release. To go with a pet holiday, use your experience and expertise to share your authority on “travel tips for pet parents” or “best and worst foods for your pet on the holidays.” Any and every time you can find a way to get your name in front of the press will be an opportunity for them to remember you and reach out when they need a source in the pet industry. Even if they don’t pick up your press release, you are getting your name in front of the journalists. Believe me: They make note and have a list of potential contacts at the ready; you just might get into their potential contact list if you’re continually reaching out.

Voice your opinion on a news story

Is there a breaking news story that is related to what you do in your pet business? Write a press release. Is there a breaking story happening in another part of the country which could have an impact on pets in your area? Send a press release. The recent hurricane, Hermine, might not have impacted you personally, but you could write a press release on “ways for pet parents to prepare for a natural disaster.” If your area of the country isn’t prone to hurricanes, but is prone to wildfires or tornadoes or snowstorms, use those weather events as your slant.

Has there been another puppy mill raid and hundreds of dogs saved? Do you own a puppy mill rescue pup? Write a release about your pup and what a great companion he or she has become. Your insight might prompt a local pet lover to foster or adopt an animal from the local shelter.

Food recalls? Write a press release on how easy it is to make homemade dog food and treats. Show the pet parent it is possible to easily, and perhaps inexpensively, undertake DIY foods and treats.

The new product or service needs to be of use and service to the news outlet’s readers. If you’re launching a new blog consultation service, you have to find a way to make it useful to the reader. In that case, you would want to slant the press release toward the business community and perhaps add in statistics on how businesses with blogs thrive more than businesses without a blog presence.

Are you starting a puppy socialization group? Perfect! This would be of interest to readers.

You’re a DIYer and want to teach other pet parents how to make crafts or cook for their pets an attainable goal and you’re hosting a class? Share it in a press release.

It’s alright to reach out to a journalist more than once–even if he or she hasn’t responded to your prior requests or published your recent press releases. There are myriad reasons why we haven’t done so:

In my next post I will give insights and tips into HOW to write a press release that gets noticed. I’ll cover content, headline, your bio and more.

Robbi Hess is an award-winning author, full-time writer, newspaper columnist, writing coach and time-management guru.  She works with bloggers and solopreneurs and blogs at All Words Matter.