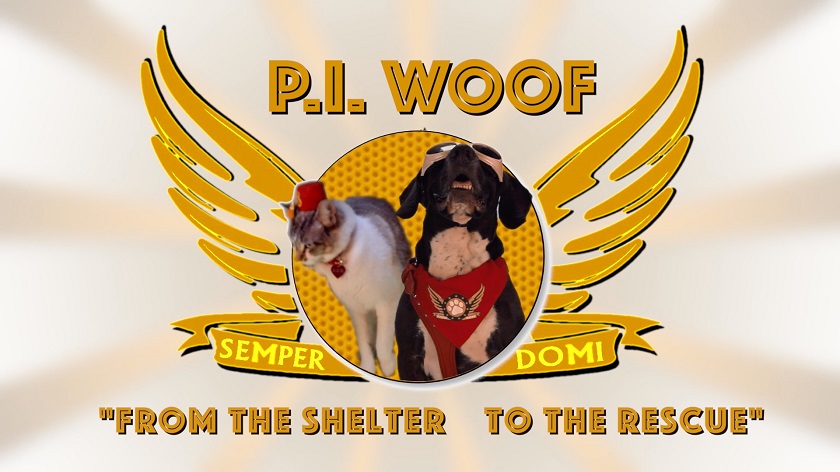 “What happens when you train shelter dogs like movie dogs?” asks award-winning dog filmmaker and author Larry Kay of Positively Woof, whose new action-comedy short film P.I. Woof stars shelter dogs from Pet Orphans of Southern California. “The biggest reason shelter dogs don’t get adopted is lack of training,” Larry said. In the past year, Kay and his film-making team have made short web films featuring more than 35 shelter dogs at Pet Orphans. Most dogs begin filming with little or no training and are transformed by the film-making experience into pets that are ready to be adopted. All of the animal actors who appear in P.I. Woof have been adopted. The program is called, P.O.V.: Pet Orphans Videos and was launched in November 2014.

P.O.V. supports Pet Orphans’ professional staff by working with volunteers to help with recreation and training, participates in on-site training programs, and attracts training professionals. In the first year, P.O.V. has documented and supported the training and adoption of 35 dogs. One important impact on Pet Orphans is that significantly fewer adopted dogs are returned, which means that the organization can make space for more dogs that it rescues from high-kill shelters. In addition to telling these dogs’ stories and helping prepare them for adoption, the project has contributed more than $30,000 to Pet Orphans in the past year, including pet dental equipment for the on-site veterinary clinic, an outdoor “puppy playground,” an indoor agility course, staff time for weekly filming and editing. Quarterly, Larry says that he hires certified professional dog trainers and  works with the American Humane “No Animals Were Harmed®” film set monitor to make sure the filming practices are safe, meet professional standards, and grow our overall skills.

The film project began as an experiment on Kay’s Positively Woof Facebook page, which currently has close to two million dog-loving fans; Kay expects to top two million fans this month. The project’s success earned the attention of Halo, Purely for Pets, which is donating 20,000 bowls of their Spot’s Stew Dog and Cat Food to feed shelter animals at Pet Orphans. Pet Orphans President Suzanne Allison expects Halo’s donation to feed all dogs and cats at their Van Nuys shelter for nearly six months.

Larry and Halo began developing the P.I. Woof film in June, 2015. He says,  “Halo has superior pet food and the company generously supports pet shelter adoption programs. So, we naturally share a lot of common ground in the projects we do together.”

Halo Vice President David Yaskulka gave the project the green light. “We love Larry Kay’s mission to train shelter dogs like movie dogs. He is a visionary filmmaker who loves bringing fun and joy to the serious subject of shelter animal adoption.”

Kay is the award-winning coauthor of Training the Best Dog Ever, #1 best-selling dog training book. He created and produced Animal Wow, the award-winning dog care DVD for children; it won awards, was distributed at PetSmart and was endorsed by The American Humane Association, among others, he said.

His animation writing credits include TV cartoons for The Pink Panther and computer games for Disney and The Muppets. 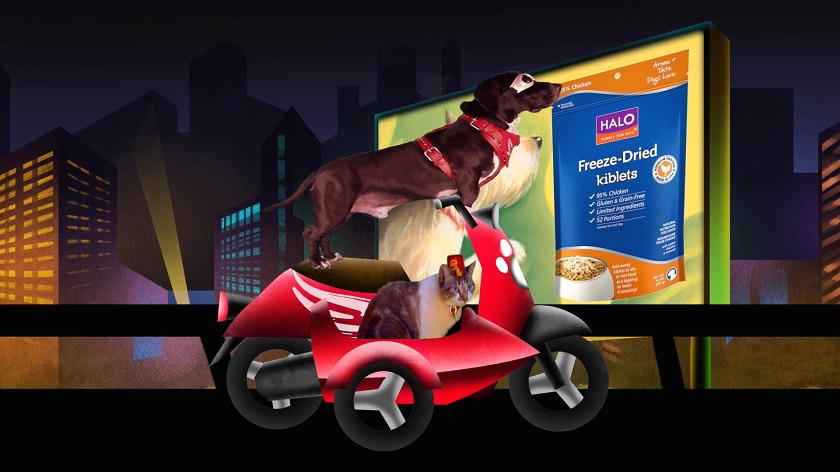 For P.I. Woof, Kay uses movie technology to immerse shelter dogs in his animated world. The title character is a wise-cracking hero, P.I. Woof, performed by Trusty, a four-year-old mutt who was sheltered at Pet Orphans for more than a year before becoming one of the first graduates of Kay’s film-making project. Trusty became so beloved that he was adopted by a staff member and is now “on campus” every day. Since Trusty is part Basset Hound and part Labrador Retriever, Pet Orphans bestowed him with the title: Am-Bassador.

P.I. Woof’s sidekick is Eight The Cat, so named because she has only eight lives, instead of a cat’s nine lives. Eight is performed by Jane, a five-year-old shelter alum whose human companions are Pet Orphans managers. The film’s villain is an animated reptile mutt named Weevil, who insists that he is a purebred Tyrannosaurus Rex even though his only vaguely T-Rex-esque trait is having little hands. Larry shares that, “Weevil is a bully who hates mutts even though he is one. Weevil denies his own shadowy self-critical beliefs, yet demands unattainable perfection in his world.”

In this episode, titled “Smellbound,” P.I. Woof must rescue shelter dogs who have been brainwashed by Weevil.

Behind the scenes with Larry Kay

When and why did you get involved in the pet industry?

“In 2003, I researched opportunities to start a new children’s media business (I’d previously written and produced for Disney, The Muppets, PBS and a number of digital media and computer game companies) and saw the pet industry looked like a solid value proposition. Little did I know then how much I would love pet people and that being around pet animals would change my life. I often say, ‘When we discover pets, we discover ourselves,’ because that’s what happened to me. My life and career are forever changed, forever richer.”

“Spider is an Aussie Cattle Dog (Blue Heeler) whom I adopted from Pet Orphans last July 26. He is about two to three-years-old and is very high energy!”

When did you come up with the idea and put together the program to train shelter dogs like movie dogs?

“After I finished coauthoring my dog training book (Training the Best Dog Ever) with President Obama’s dog trainer, I began to look at what’s next. I’d missed making films, but realized I needed to build a following first. So I focused on building my Facebook audience while developing the project, initially as a reality series for television or the web. I attracted a couple of heavy-hitters in the entertainment industry to partner with me, but we couldn’t get serious attention because the idea sounded impossible to them. So that’s when I decided to start making these short films as a proof of concept, and that generated its own momentum.” 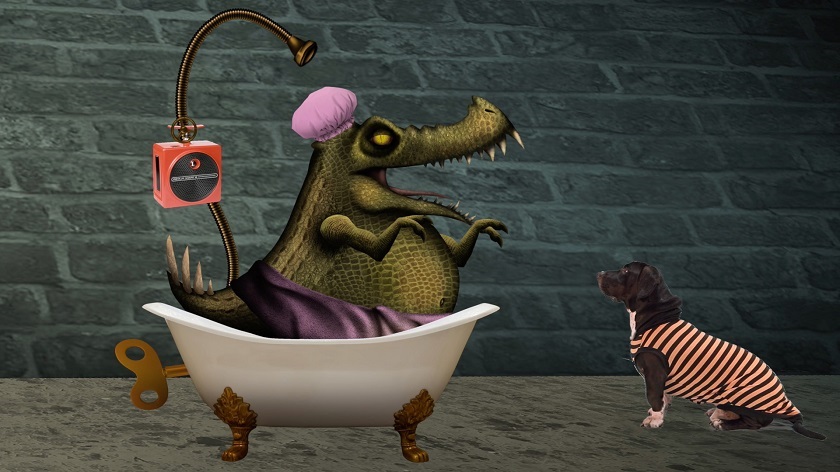 Are these dogs more adoptable following the training?

“All of filming is done at the shelter at Pet Orphans. We use one of their buildings as a film studio. We ask the shelter operators, ‘Who do you want us to work with today?’ We have personally worked with dogs for two weeks in advance of filming doing basic training with them before bringing them onto the film set. One time there was a really rambunctious lab shepherd mix who was young and had no previous training. We taught him to sit, down, stay, come and walk on a leash. It took about two weeks to get him camera-ready. His name was Mozart.

The benefit of the films is it expands awareness about these dogs and Pet Orphans and about how great shelter dogs are. To have these videos that star shelter dogs re-frames some of the misconceptions and prejudgments we may have about shelter dogs. Instead of them being “less than,” by putting them in a film actually gives them a chance in the spotlight which, to some people, makes them “more than.”

We’ve worked with about three dozen dogs so far and almost all of them have gotten adopted. Those who haven’t yet been adopted we continue to work with until we do. The dog, Trusty, who is the star of PI Woof was chosen because he’d been at Pet Orphans a long time, he’d been adopted and returned; he was deemed difficult. Everyone worked together to make him a special project and with that much positive attention he became awesome.

What kind of “behind the scenes” info can you share with us?

The music composer, Jimmy Hammer, and I were introduced to one another by our dogs at the dog park. We’ve collaborated on a few projects. Hammer’s credits include ABC, Disney and Dreamworks. Voice talent on the film include Randy Crenshaw, he voices the hero Woof and the villain, Weevil. Crenshaw’s credits include more than 500 movies and television shows. Megan Blake voices Eight The Cat. She has hosted PBS’ Animal Attractions Television series as well as the Humane Society of the US Genesis Awards. She has appeared in more than 25 feature films. Randy and his family have an adopted shelter dog and Megan and her husband have two shelter dogs, two rescued horses and an adopted cat.

My animation touchstones are Bugs Bunny, Monty Python, Yosemite Sam and Wile E Coyote. I’m a big film geek and in the video you will see an homage to Alfred Hitchcock, from Spellbound to Vertigo.

As we were making this film, from a filmmaker’s standpoint, I didn’t know whether this would work but each step of the way it held together and became a unique finished project. You may also see some references to James Bond, Gilbert and Sullivan, the Beatles and Jefferson Airplane… if you pay close enough attention.

When doing a movie you do need to get the animals acclimated to wearing hats and costumes. They also need to learn their “marks” so they know when and where to move and. It’s a great process!

Robbi Hess is the former BlogPaws blog manager and will be speaking on Time Management Tips For The Blogger at the BlogPaws 2016 Conference. She blogs at All Words Matter and is a time management coach.